Luke’s (18 mos) Mom’s Day Out class hosted a humorous Christmas program yesterday. It consisted of all of the kids sitting on a stage and singing Christmas carols and/or crying. Luckily my video camera was on hand to capture the riveting footage of Luke sitting in his teacher’s lap while he sucked on his fingers and/or put them in his nose.

An announcement was made that Santa would be there, but would be unable to do individual pictures because he had COPD and didn’t want to get sick. I knew Santa was getting old, but he is definitely not as magical as I remembered. I couldn’t help but wonder if Santa’s pulmonologist was on “the good list” this year. Let’s hope so.

When I picked Luke up that afternoon we headed straight to the mall to get a picture made with Santa. While waiting in line, Luke got a little antsy and had to get out of his stroller. Once free of his cumbersome wheels, he took off running. He ran directly into the North Pole exit and fast tracked it to Santa. He managed a “ho-ho-ho!” before I caught up to him and put him back in line.
About ten minutes later we got our turn, but stage fright had set in and Luke refused to look in Santa’s vicinity. I held Luke as I recounted to Santa, everything that Luke “wanted” for Christmas while Luke looked in the opposite direction, whispering “no way, no way, no way.”

I wasn’t about to get out of there without a photo op, and since Luke refused to have his picture made solely with the fat man… 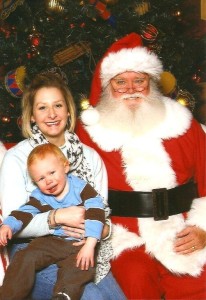 …I joined in the fun.