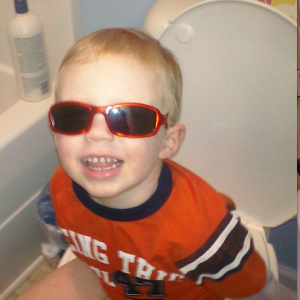 “Get him a toy out of the treasure chest.”
“No,” I told my husband.  “Pooping in front of the potty does not qualify him to go to the treasure chest.”
“But he was trying.  He went into the bathroom, stood on the stool…”
“And crapped on the floor,” I interrupted.
There we were, husband and wife, in the throws of an argument over our two and a half year old son’s potty training antics.  Fundamental differences of opinion had plagued us recently when it came to Luke’s bathroom use.  Truth be told, he was doing quite well as long as he was completely without pants or a diaper.  He would go into the bathroom, get on the stool and perform a number one like a champ.  Numero dos, however, was another story.
We provided him with positive reinforcement, made him a treasure chest and a sticker chart for his successful visits to the bathroom.  Still, he didn’t seem motivated to do the part that required sitting down.  “Why should he?” I thought.  Who wouldn’t love to just go wherever they are and have someone else clean up after them and powder their behind?  Seems like a pretty sweet deal to me.
But, maybe something else was slowing his progress.  Maybe I was a bad teacher.  That had to be it.  Who was I, to tell him how to use the potty when I clearly had my own hang-ups about it?   As a child (read: and adult) I had always been afraid of the dark.  One night, my older, and meaner, sister said something to me that I’ve never forgotten, despite how ridiculous I now know it to be.
“You should never, ever flush the toilet at night.  If you do, monsters will come out and kill you because they know your parents can’t hear your screams over the sound of the toilet.”
I was horrified, and to this day, I will not flush a toilet after dark.  My husband has come to accept it, although I now say that I don’t want the sound of the flush to wake up Luke (who sleeps on the other side of the house).   Yet, there I stood, a grown woman who saw fit to pass judgment on her kid because he missed the bowl by a couple of feet.
“Here you go, Luke.  Come pick something out of the treasure chest,” I told him.  He was delighted over his reward and I was proud of his effort.  True, it may not have been a perfect attempt, but I’m not a perfect mom.  The fact is, potty training takes time, a lot of time.  My hope is that he can accomplish that without being scarred for life.  If that happens, then I have done my job.   My other hope is that my older sister has kids one day so I can totally mess them up.  Revenge is sweet.