Alas, I have returned from a relaxing week at the beach feeling rejuvenated and ready to tackle all life can throw at me. Ok, truth time. It was a great week, indeed. The weather was beautiful, and the accommodations were unimaginable, but the company could have been a little better.
As luck would have it, Luke (2.5 years old) was absent, and in his place was his alter ego, Damien. I did NOT let this spoil my perfect week, but it did make things a little challenging. His latest vice is back talking, and like his dear, sweet mother he doesn’t do anything halfway. There were no four-letter words spoken, but his favorite thing to say was, “Mom, hush up! You unda-stand me?”
Brantley and I considered, and applied, all forms of discipline to include time outs, taking away toys, and my least favorite- spanking.  After about a full week of trial and error, he finally responded positively to, of all things, a stern talking. Who’d a thunk it? This wasn’t discovered, however, until everyone in Destin, FL had received a, “Hush up! Wight now. You unda-stand me,” including the waitress at Crab Trap. In Luke’s defense, she totally had it coming. After waiting fifteen minutes to show up at our table, we didn’t need to hear her talk about the daily specials.
As it would turn out, the advice my Mom gave us at the beginning of the week was right on. I hate when that happens. “He’s just trying to get your attention,” she said. “Preposterous,” I thought. “He ALWAYS has our attention.” If only my Mom and I had been talking about the same type of attention, then Brantley and I wouldn’t have sat on the beach and cried one day after deciding that Luke must have Tourette’s syndrome. “Why else could he NOT stop saying, “hush up?’” we thought.
So after a week in the sun my brain was finally willing to accept the advice my Mom had oh, so quietly mentioned seven days earlier. Sometimes, the attention kids need is more than eye contact and a reprimand. I now know that a well-timed hug, kiss, and tickle fight can prevent a lot of unwanted behavior. So far, this is working for us. When Damien pops back up, and believe me he does, we address it and move on.
So to summarize, I learned on vacation how to be a better parent, that my Mom is always right (spoken under my breath), and that seagulls LOVE popcorn. 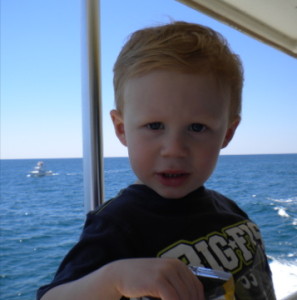