In honor of Mother’s Day, I’d like to introduce you to Heather Davis, aka Minivan Momma. Heather is a hilarious gal I’ve come to know through her blog. She recently debuted her comedy skills in Listen to Your Mother, for Northwest Arkansas, which is a national series of live readings in celebration of Mother’s Day. In her free time Heather teaches middle school English, colors her hair, and I believe, drives a Porsche coupe.

Free Range Turtle- Heather Davis
There was a snapping, non-snapping turtle loose in my house for almost a week.  My sister wouldn’t stop by, not even for chocolate, until the savage beast was caught. I don’t blame her.
See, my husband, in what can only be described as an effort to take the lead in the “I love you best” contest that our daughters are continually staging, allowed said daughters to kidnap a mean turtle from its natural habitat.  They named him Luther.  My husband assured me that this was not a snapping turtle; he knew this since he was raised on a farm.  I reminded him that he was not raised on a turtle farm, and any turtle that inches his head out of his shell and snaps in my general direction was, indeed, a snapping turtle.  Luther was aggressive.
That night, Luther was housed in a cardboard box with a saucer of water and enough lettuce to stock a salad bar.  When we returned from school the next afternoon, my oldest daughter reported that Luther had “soiled” his box.  (Who talks like this?) She and her younger sister transferred Luther to a shoe box with a hinged lid.  They closed the lid and hustled to softball practice.
Upon returning, the lid was open; Luther was AWOL.
Normally, I’m a pretty brave soul unless snakes are involved.  But, to have a turtle loose in my abode almost sent me packing to the local Holiday Inn Express.  My morning routine was totally altered as I’d lean over the bed and drop magazines on the floor to see if I could get Luther the snapping, non-snapping turtle to bite the corners off of Real Simple instead of the toes off of me.
I also became a runner.  When I’d turn the lights off in a room, I’d run to the next well-lit area of my home shrieking like a banshee in an effort to attempt to outrun Luther or scare him away.  It worked.  We didn’t see hide nor shell of Luther, whom I had renamed Lucifer.
On day five, I let my guard down as I walked from my bedroom toward the kitchen to make breakfast (and by “make breakfast”, I mean unwrap a pop tart).  I just happened to glance down at my feet, and there stood Lucifer.  I screamed; he hissed.  My daughters came, and without any concern at all for my well-being, they scooped Lucifer into their arms and coddled him.  One even said, in baby talk, “Did Momma hurt my turtle baby?”
With donut shop bribery, I was able to convince them that Lucifer, I mean Luther, missed his family and had been trying desperately for the past five days to get outside so he could go home.  Tearfully, my daughters let him go.  They promised to eat a chocolate long john donut in his honor.  Heaving big sighs, they ceremoniously let him go in our front lawn.  Luther quickly crawled toward the street as my daughters sobbed on our front walk.
My older daughter put her arm around her little sister and said, “Don’t be sad.”  They simultaneously sniffed and sighed in sync with each other.  “We’ll have Daddy to get us a lizard tonight.”
“Hello? Holiday Inn Express?” 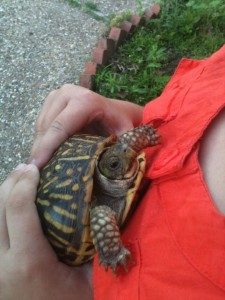 Heather Davis over-shares the hilarity that is her life on www.Minivan-Momma.com.  She invites you to stop by and stalk her.