We all love our kids, but there are times when we can do them, and ourselves a favor by getting the hell away from them. This past weekend my two friends and I did just that.

Once we arrived at our destination we had an amazing time. It was the getting there and the departure that allowed for a few snafus. The easiest way for me to sum this up for you is in a two-part timeline.

Friday morning 6:30- My friend Loren Leigh takes her husband, John Allen, to have an esophageal endoscopy.

At 9:00 AM they return home. Loren Leigh explains to her husband the results of the procedure for the second time. We tell him, “Glad you don’t have cancer,” put him in bed, and depart for the beach.

At 10:30 we are well on our way. Loren Leigh calls to check on John Allen. He has been asleep, but says that he is feeling fine. I hear Loren Leigh tell him the results of the procedure for the third time. I chuckle for a moment, and then realize that using the Verizon navigation on my phone has rapidly depleted the battery. We have no car chargers for our phones.

At 11:00 my phone runs out of battery. We switch over to using Loren Leigh’s phone for navigation. All is good. We are so ready to relax by the pool.

At noon her phone also runs out of battery. We have a momentary freak out until we realize that we can use the iPad for navigating. Now, I’ve been to and from Destin, FL a million times. Had we gone the way I’m used to going we would have had no problem, but our navigation systems had taken us on a “faster” route that had led us to a desolate Nowheresville.

At 12:05 I get an alert message on the iPad stating, “The data limit has been exceeded.” I select the options to add more data, but nothing happens, landing us totally and completely off the grid. To make matters worse, we were in the desolate area of a Florida highway where there was nothing but dirt roads leading to trailers. I lovingly refer to this barren wasteland as, “Sex offender valley.” Add to our navigational issues the fact that we aren’t able to get word to our other friend, Mary Marshall, who had flown in at 9:00 AM, that we may be later than predicted and/or murdered. As you can tell by now, everyone in this story has a double name except me. I will now be referring to myself as, “Just Lori.”

At 12:30 comes a sigh of relief as we approach a gas station. Loren Leigh whips the car into the parking lot and immediately starts digging through her luggage for her wall charger. Oh yes, we’re about to steal some electricity. I hook it up to an electrical outlet next to the propane tanks. She goes inside to start offering people cash for their car chargers. Suddenly, I hear my name. I put the dead phone to my ear and say, “Hello.” Then I look over and see Loren Leigh holding an iPhone charger. It’s shiny and new- still in the box.

We jump in the car and I begin savagely trying to get the box open, much like a raccoon with a trash bag. “Dang it,” I said. “I think we need scissors or a pocketknife to open it. I’ll be back.” There are lots of people to choose from, but I look for a stranger that is most likely to be carrying a pocketknife. “Excuse me sir,” I say to a man pumping gas. “I really need this and can’t seem to get it open.” I reflect back for a moment as he takes the box. I can’t help thinking that I’m a mere shell of the woman who put a fire pit together one week ago. I snap back to reality as I hear the man saying something. He reads something on the box and says, “Peel here,” as he gingerly peels the box apart with his bare hands. “What a show off,” I think to myself as he tells me to have a, “Blessed day.”

At 2:00 PM we arrive in Destin and meet up with Mary Marshall. Our arrival is later than predicted, but she doesn’t show one ounce of impatience or frustration. Perhaps she’s surprised that we didn’t die in sex offender valley. Finally, the three of us collapse into chairs by the pool- Loren Leigh, Mary Marshall, and Just Lori. 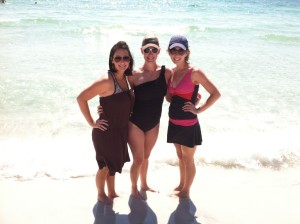