So when I left off last week, my five-year-old son had been in trouble for using naughty words. His excuse for using those words was that he didn’t know enough Spanish and therefore HAD to use them.
This morning a perfect opportunity opened up for us to rehash this discussion, which was a good thing. I hadn’t felt that I had really gotten through to him in our previous discussion and had been hoping for a chance to broach the subject again in an organic way, so as not to alert his brain that he was being lectured. He’s a smart kid and if he gets the impression that he’s in trouble, then he will shut down and just say what he thinks I want to hear.
Side note: Is it even possible to “get through” to a five-year-old boy? Probably not, but I tried anyway and this is how it went. 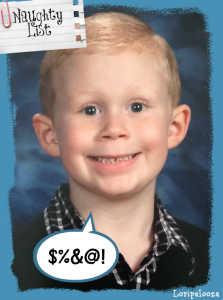 Luke: Mom, I just feel like I’m going to be on the naughty list forever.
Me: What makes you think you’re on the naughty list?
Luke: Because I use bad words EVERY SINGLE DAY.
Me: Why do you think you need to use bad words when you know all sorts of big, smart words?
Luke: Because they help me talk like I feel when I say them.
Me: Hmmm, I have an idea. Let’s make a list of your bad words and come up with other things you can say that mean the same thing, but sound nicer?
Luke: Oh Mom, you’re talking like an old man.
Me: Okay, instead of saying “stupid” what could you say instead?
Luke: Oooh, I know. I could say, “You’re fired!”
Me: Great! Okay, what about the word “hate?” That’s a really bad one. What could we say instead of that?
Luke: I’m done talking about this. Can I have a snack?
Me: No. Not until we finish. Instead of saying, “I hate this,” what could you say?
Luke: I guess I could just say somefing like, “I don’t want to be here!”
Me: Okay, great. Now let’s do one more. Instead of saying “shut up” what is something else you could say.
Luke: You never got me a snack.
Me: That’s because we aren’t finished. Now, this is the last one. Instead of saying “shut up” you could say…
Luke: Okay. Okay. I could just say, “Hey, I don’t want to talk about this.”
Me: That’s perfect! So next time you get angry instead of using those bad words you can use the nicer words and I will still know how you feel. I’m so proud of you.
I get up and leave the room to get him the snack I had promised when I hear him mumble, “I don’t want to be here. She is SO fired.”
Wait. Was that progress?