It goes without saying, but the 2013 Iron Bowl was AMAZING! The only thing that could have made it better was the jubilant, drunken fans I encountered after the game.
(The fans you’re about to see agreed to be interviewed on camera. )
Auburn fan: “Who do you write for?”
Me: “It’s for my blog, Loripalooza.”
Auburn fan: “The War Eagle Journal? I’ve heard of that. Awesome!”
Me: “That’s not what I said.”
Auburn fan: “Hey! I’m going to be on the War Eagle Journal! Whoooooo!”
And, it just got better from there.
Youtube link if you’re having trouble viewing this on your mobile device,
http://www.youtube.com/watch?v=UBxml9P3Yu4
I have to say Captain America was never my favorite super-hero, but now I am legitimately worried for the people is responsible for protecting. Be safe, y’all- especially when going over bridges. 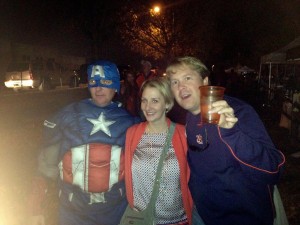