Today was a rough behavior day at our house. It was the kind of day when a certain five-year-old boy lost one privilege after another until he was basically stripped of every Lego, battery operated device, and toy he had. All he had access to was paper, crayons, and his books.

I settled in to do a little writing while Luke busied himself with the only things he had available.
Ten minutes later he was back at my side complaining of being bored. “I’m tired of coloring. Can I have a toy back?”
“No. Go read a book.”
“I can’t read.”
Dammit. I hate when my kid’s punishment punishes me, too.
I closed my laptop and told him to go pick out a few books for me to read to him. He snuggled up beside me on the couch as I opened the first book.
“Mom,” he said. “Do you know why I use bad words sometimes?”
“No. Why?”
“It’s because I don’t know enough Spanish.” 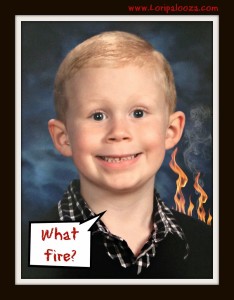 One thought on “Why My Son Uses Bad Words: A Luke-ism”