I didn’t have to practice becoming awkward. It’s something I was born with. As I continue to learn and grow, I’d like to share my journey to normalcy so that other Awkwads may learn from my mistakes. I hope each person can take something from this lesson on how to behave in public and carry it awkwardly, perhaps in a fanny pack, throughout their awkward lives.

(Side note- only Awkwads can use the word, Awkwad. Those who aren’t awkward should refer to it as the A-word.)

I was in Target a couple of days ago when I thought I saw my friend Amber. She was at a distance when I first saw her profile, but then she turned and I could only see the back of her head. I’ve learned from past experiences NOT to run up and hug (or smack on the rear) people I think I know in public.

Walking a few feet closer was clearly out of the question. I didn’t have time for shenanigans. So I pretended to look at the little girl’s clothing while shouting, “Amber!” to see if she would hear her name and look around. After my fourth try, (yeah, I’m persistent) I heard one of the Target employees say, “We have a lost child.” I turned to see this employee standing behind me and speaking into her walky-talky. There was a sense of urgency in her voice as she asked, “Ma’am what does Amber look like? What is she wearing?”

I was frozen. Mortified. I could’ve just told her that I was too lazy to walk fifty feet and see if that was my friend, Amber BUT I didn’t. My gaze held steadfast on the sparkly, pink shirt I was gripping and my awkwardness came shining through.

I just shook my head as my weak voice uttered, “Never mind. Don’t need her.”

I’m pretty sure the Target employee stood there staring at me for awhile, but much like a turtle can withdraw into its shell when it senses danger, I am able to slip into a fugue state when I sense embarrassment. I have no idea what happened for the next couple of hours, but according to the items found later in my car I made several impulse purchases before leaving Target. Then, I went to Krispy Kreme.

Amber is so high maintenance. 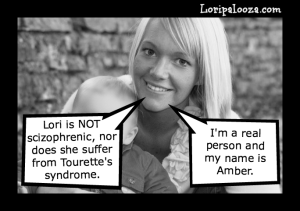 5 thoughts on “How To Behave In Public: Lesson 1”