Luke and I took a trip to Greenwood, MS last week to visit Robin O’Bryant and her three girls. As usual, my little Casanova fell hard and fast. His newest love interest was Robin’s youngest, Lady Sadie. 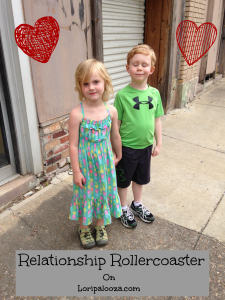 With the big girls at school and Robin needing to run errands, I offered to take Luke and Sadie to lunch. It was our second day in Greenwood and I decided on Steven’s Barbeque- an excellent choice. Luke and Sadie had already chosen a table and when I sat down with our food Luke introduced me to the man at the the next table. “Mom, this is a man we’ve been talking to. We told him that we are cousins and that this is our first REAL date.” 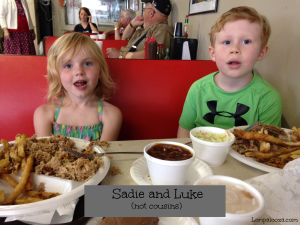 Later that afternoon with Sadie in her tiara and Luke in his Batman mask, they wed. However, it wouldn’t be long before their marriage had its first hiccup.

Not long after the wedding ceremony they were playing Minecraft in the girl’s room and Luke had a cow. I don’t mean he pitched a fit. I mean while playing the game of Minecraft he had acquired the singular form of “cattle.” This was a problem because Sadie is afraid of cows. She stormed out of the room with tears in her eyes as Luke shouted, “Fine, Sadie! Fine. I’ll get rid of the cow!! What do you want, Sadie? Do you want a pig? Can we AT LEAST HAVE A PIG?!”

Things cooled off after they agreed on obtaining a pig for the most pointless game ever created. Side note- if you know the plot, or point of Minecraft, please get in touch with me.

At dinner that night Sadie spilled Luke’s pink lemonade. She tried to make it up to him by tying his shoes. While he was impressed, the lemonade was something he just couldn’t get past. You can see him here breaking things off.

In a show of poor taste, he tried to immediately get a rebound girl in Sadie’s older sister, Emma.

Emma was not excited and informed him that she already had a boyfriend. This did not deter Luke from laying on the charm. He began pulling up his shirt. “Have you seen my five-year-old belly?”

Robin interjected. “You know it isn’t really nice to date the sister of someone you just broke up with.”

Luke shrugged his shoulders and pointed back and forth between Emma and Sadie. “Eenie. Meenie. Miney. LOVE.”

Similar laughter and antics continued throughout the week, but none as funny as what I witnessed on our last night at the O’Bryant’s. Luke asked Robin’s eldest daughter to connect their iPads so they could all play Minecraft together. She was wearing her bathrobe after having just showered and told him that she would do it as soon as she got dressed. The second she walked out of the room, Sadie stuck her little finger in Luke’s face. There was fire in her eyes and she spoke through gritted teeth.

“If you EVER saw my sister nekkid I would be SO MAD at you!”

For the first time all week, Luke was speechless and I wasn’t about to complain.

6 thoughts on “Luke and Sadie: A Relationship Rollercoaster”