I believe Valentine’s Day is a made up holiday perpetrated on consumers by the candy, greeting card and medical industry in an effort to have us needlessly spend money. Those with partners fall for it hook, line and sinker with Godiva chocolates, and cheesy cards about love. Those without partners unnecessarily decide they must have a partner, if only for one night. That person then goes home with someone from the bar, catches a germ that won’t wash off, and shows up at their doctor’s office for treatment three to four days later.

One of the many things I love about my husband is that he is as unromantic as I am. Most women would’ve been appalled at the question he posed to me last week regarding Valentine’s Day.
“Hey, instead of getting each other Valentine’s Day cards this year, can we each throw five dollars in the garbage can? That’s where it’ll go the next day, anyway.”
My heart swelled with pride. “You complete me.”

I don’t need a specific day of the year to remember that I have the most wonderful husband in the world (when he isn’t being a butt hole). Happy VD everyone.

Halloween had a little less magic this year than in years past. Thanks to recent events from Yemen, I found it somewhat inappropriate to dress Luke in his Unibomber costume. So, we had to resort back to the cow costume he didn’t want to wear. It took both Brantley and I to wrestle him into the costume and get it zipped up. All that fun wouldn’t have been complete without a marital spat, which ended in me shouting at Brantley, “He’s the two year old so why are you acting like a big fat baby?” Not my finest moment, but we made it through and after a few houses Luke got the hang of saying, “Trick or treat.”

We made it back to the house in time to give out candy and experience my favorite part of Halloween, passing judgement on everyone’s costumes. There was the expected super heroes, vampires and zombies, with splashes of originality and cute kids. Then came the preteen girls dressed like jail bait. Did their Dad’s not notice their costumes before they walked out the door? I saw fit to punish them with a candy penalty. They would receive only one piece per vixen.
Next, came the boys, or should I say, young men who appeared far too tall to be trick or treating. One of these gentleman approached with a familiar mask made popular in the movie Scream. By his size I guessed him to be about fourteen. He eyed the bowl and asked for a specific item, a trait I detest and for which I usually give a candy penalty. However, this kid was big enough to beat the crap out of me so I allowed it. “Do you think I could have one more for my wife?” he asked. “She loves those.”
“What did you just say? Did you say wife?” I asked
I could feel a smile coming from under that mask as he pointed to his wedding band. “Get off my porch,” I stated simply to the grown man clutching a pillow case full of candy, and he did. Loser.
About that time, anorexic runner lady ran by for her fourth sprint of the day. She’s the poster child for the female athlete triad and her body hasn’t seen a period in years. Of course she couldn’t be home giving out candy like everyone else. That would be unhealthy. So, instead she runs the neighborhood on a dark night with the highest traffic of the year. Hey Miss, getting hit by a car isn’t good for you, either.
Up walked another individual who was too big to be trick or treating. I say individual becuase I was unsure of their gender, but he/she weighed in at a good deuce and a half with what appeared to be a black DD bra on the outside of his/her clothes. That was the costume, normal street clothes with a bra on the outside. He/she definitely filled out the bra, which lead me to think female, but the rest of the picture just didn’t fit. Of course it really didn’t matter other than requiring me to change my standard question, “What are you supposed to be, little girl?” Instead, I changed it to, “Hey, look at you there.”
The night drew on and the candy eventually dwindled with two little boys finishing me off. “I like peanut butter cups,” one of them told me. “Sorry, I don’t have anymore of those,” I said politely, while secretly wishing him a candy penalty for being so forward. “But, I see some behind your back,” said annoying little boy. “Mind your business,” I told him. I wasn’t about to give up all of my candy after all the hard work I had done that evening. I sent them on their way, blew out the jack-o-lantern, and turned off the lights.
At last, Halloween had drawn to a close. Time to go Christmas shopping. Ugh! 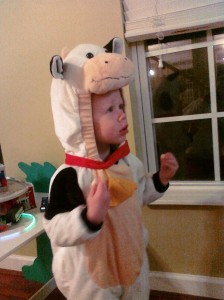