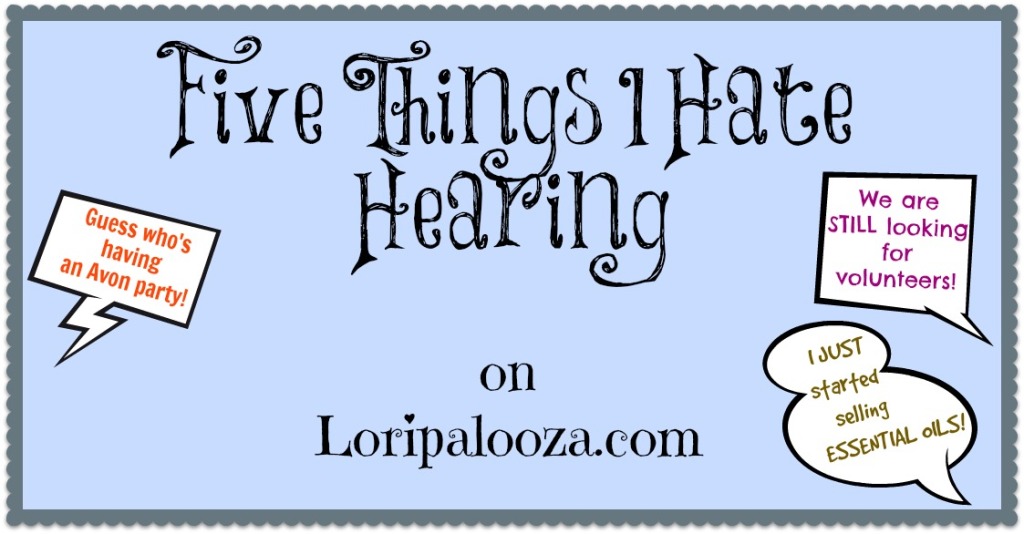 There are a considerable number of phrases that cause me to cringe a little, but some are worse than others. Here are the top five things I hate hearing.

It’s pretty apparent that the older I get, the less I’m able to tolerate. However, I’m not the only one experiencing intolerance with aging. So spill it. I want to hear what grinds your gears? What phrases, cliches, or otherwise annoying activities make you cringe? There are no wrong answers. Go!

My older sister, Heather, and I used to play a game. In the game we would imagine doing absurd things during inappropriate times. I hate to say it, but the game was most often played during church (sorry, Mom and Dad).

Heather would start, “Wouldn’t it be funny if I took off my clothes, ran up to the pulpit and started doing jumping jacks?”

“Yes!” I’d say. The answer was always yes. It was my turn. “Wouldn’t it be funny if I took that man’s wig off and put it on his wife?”

“Yes!” “Wouldn’t it be funny if I took off my shoe and threw it at the preacher?” she’d ask.

“Yes!” “Wouldn’t it be funny if I reached over and slapped the person sitting in front of Leigh (our youngest sister) and they thought she did it?”

Thankfully, we never acted on our ideas. Even then we knew the idea of our mischief was much better than the consequences of the real thing. As an adult I will occasionally surprise myself with a “wouldn’t it be funny if..” thought. While jumping on a trampoline with my son today I thought, wouldn’t it be funny if I was doing this with crutches and a cast on my leg? Now that I think about it, maybe not.