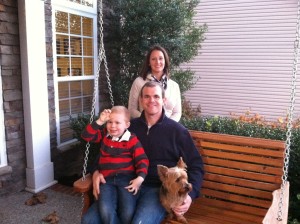 Just a couple of days after our return from Disney World, I tested positive for the flu. This confirmed my suspicion that Disney World is the filthiest place on earth. Friends and family swooped in to help out with Luke who was still recovering from Disney pneumonia. I proceeded to wallow in the bed for a few days, until today when I awoke feeling like a real person again. I wiped the sleep out of my eyes. Then, I did it again. And, again.
I asked Brantley to look at my eye. He chuckled, “You have pink eye.” I’m not sure what else he said because I was too busy throwing punches into the air. I do NOT sit on public toilet seats. I do NOT lick door knobs. I wash my hands all the live long day, and yet here I am oozing funk and resembling a Garbage Pail Kid.
This only leaves one question. Wanna make out? 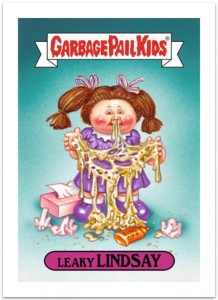 I’m not ready to laugh about it yet, but if I don’t post something on this blog soon it’ll turn into a ghost town.
We went to Disney World last week. Luke’s favorite ride must have been the one to Children’s Hospital because he rode it twice.
Our first stop to the ER was Tuesday morning at 4AM where they ruled out appendicitis, and misdiagnosed him with a stomach virus. “Thanks for nothing. Here’s a giant bucket of cash.”

After that there were a couple of days when he felt like going to the parks or swimming for a little bit, so we took advantage of it. We would go, stay a few hours, and then take him home to rest. Even though he had to be carried between rides, he enjoyed himself while he was on them.
Then, his cough got worse- a lot worse, with a temperature well over 103 degrees. We used his nebulizer, as we always do when he has asthma flare ups, but it didn’t help. Back to the emergency room we went. It had been four days since our last visit.
When I walked in carrying him, he was totally limp. A nurse came around the corner with a wheelchair. She was en route to retrieve another patient who was hobbling her way on crutches. She took one look at Luke, and immediately ushered us to the back, abandoning the other patient. “Sick babies come first,” she whispered as we walked down the hall.
This time there wasn’t a lot of messing around. He was given an hour-long breathing treatment, X-rays, and a lot of steroids. Afterward, his wheezing wasn’t completely relieved, but it was improved. Our main concern at that point was the fact that he couldn’t stop coughing. When I say he couldn’t stop coughing, I mean he literally could not even stop coughing long enough to blow his nose, let alone speak. His diagnosis was pneumonia, and bronchitis.
I hammered away at the resident until she agreed to give him a cough suppressant. She reluctantly agreed despite her argument that cough suppressants haven’t been proven to work. Her alternative suggestion was to have him sip warm tea. It was midnight. What a perfect time to run out for some hot tea. She also said Luke needed to be on Augmentin for ten days, and then wrote a prescription for five days worth. “Thanks, genius. Here’s another bucket of cash. Stay in school and learn how to count.”
I couldn’t help thinking how much worse things could’ve been if we had listened to the previous diagnosis and continued waiting out the supposed virus. I guess that’s where parental instinct and persistence comes in.
Now that all of that is off my chest, here are some pictures of the fun times.

Luke (3 1/2 yrs.) overheard his father and I having a conversation in the car. Without thinking, I made mention of the coyotes that we often hear behind our house at night. Luke piped up, “Mom, did you say we have coyotes?!” Not wanting him to be worried about coyotes outside our house, thus adding to his already vast nightmare material, I said the only thing I could think of that sounded like coyote. “No baby,” I lied. “I said we have..peyote.”
There just aren’t enough words that rhyme with coyote.

PS: If my blogging is scarce next week it is due to the fact that we will be rocking Disney World for eight days. Please pray that I don’t lose my mind and purchase a bunch of Disney themed clothing. Cheers!