Remember a couple of days ago when I was talking about embracing my age and being proud of my newly found gray hair? Well, it took me a few days to realize this, but it was all a lie.

This is how I found out.

On Wednesday night, a friend and I went to the Loveless Cafe for a live music show called Music City Roots. It’s a great place to hear several different up and coming acts at once, and I was there for just that purpose. I knew the band Alanna Royale would be performing and I had planned on writing an article about them for the paper.

At one point that evening I was speaking to the lead singer, who is also named Alanna. We exchanged back and forth regarding what the band had coming up, their album release next month, and their excitement over playing Bonaroo in June.

With many of my questions, Alanna would answer with an enthusiastic, “Yes ma’am.” I shook off the first one, but the second and third really started to sting. I thought, “Why is she calling me ma’am? I mean, I’m clearly just an average thirty-three year old girl like everyone else here.”

I drove home after the show white-knuckled. My car couldn’t go slow enough around the curves and I lurched onto the break at every yellow light. I kept trying to figure out why I was driving so nervously. I’m not used to driving long distances at night, but it never used to bother me.

When I recalled the evening’s events to my husband, I included being ma’am’ed and the uncomfortable drive home. “Yeah,” he yawned. “Getting old is a bitch.”

That’s when it hit me.

“Maybe I’m not ok with the whole aging process.”

I looked at the facts.

Well, it looks like I’ve got some self to work on. 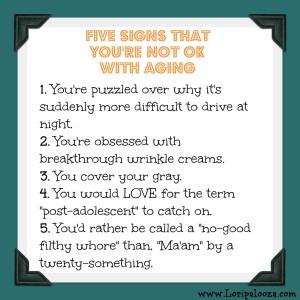 Last month I turned thirty-three and discovered my first gray hairs, but I didn’t lose my cool. It sounds strange, but I feel as though I earned every one of those little gray babies. I’m getting old and I’m ok with it.

Here’s the part where I reflect.

I don’t regret many of my young-life decisions because they taught me a great deal, but if I could go back and change just one thing what would it be? Would it be to have more patience, or compassion? Would it be to work harder? No, if given the chance I would throw a better first birthday party for my son and it would be epic.

I came home and sifted through old photos determined to find something from that first birthday that would be of equal or greater value to what I had just witnessed. This is what I found. 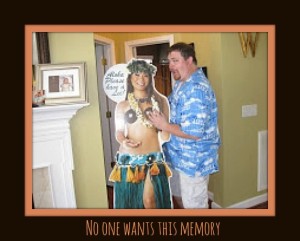 The photo quality is poor because it was probably taken on a four, or five-year-old camera phone (add to list of regrets), but the sentiment isn’t lost. There stands my better half groping the bosom of a cardboard cut-out at our only son’s Hawaiian luau-themed first birthday party.

Why don’t you look at some other pictures while I snot-bubble cry, okay?

Drum roll, please. I give you…
Elle’s First Birthday 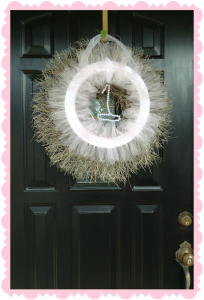 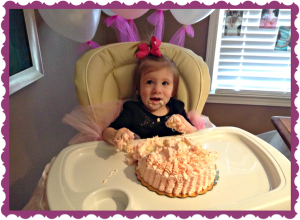 Is it wrong to want a do-over kid just so I can throw a better party for him/her? I’m sure kids are born every day for worse reasons than that. Quick! Someone tie my tubes!!