“You’ll never get those sunglasses off.” My niece, Ciara plainly stated.

“Yes, I will!” I tugged and tugged but they were stuck to my face with what seemed like industrial strength cement.

“Didn’t you read the tag that came with them?” she asked. “It said guaranteed NOT to come off.”

“I don’t care what it said. I’m tired of wearing them,” I shouted back.

I awoke from the dream with a start. The strange thing was, my arms actually felt tired. It was as if I had really struggled while I was dreaming. That’s when I looked down and saw the nose splint that had previously been affixed to my freshly fractured and post-operative nose. It was resting in my hands, and my hands in my lap.

I jumped out of bed after realizing what I had done. “I ripped it off! I ripped it off!” I shouted. Brantley finally rolled over and removed his ear plugs. “Why did you do that?” he asked.

“I was dreaming, Brantley. I thought I was wearing sunglasses and I ripped it off like the freaking Incredible Hulk!”

He rolled BACK over. “You have the weirdest dreams.”

All of this excitement occurred before 6:45 this morning. So now, we wait for my 9:30 appointment with the surgeon. Happy Wednesday.

It’s been a while since there was anything worth noting in my “middle of the night good ideas” journal. However, last night was different. The natives were restless, and I awoke this morning to find some real gems in my notebook and faintly in my memory. I’ll start by noting that my writing utensil of choice was a sharpie. Apparently, a pen just wouldn’t do.

The first entry was, I recall, used as a dream journal and simply states, “Everybody is talking about milk money.” Interesting enough, but I should have been a little more detailed. Who is “everybody” and what was their tone? Were they being jovial and offering me some milk money, or were they getting in my face and trying to take my milk money? This will remain one of the biggest unsolved mysteries of our time.

Later in the night I awoke and decided to brainstorm on some good band names, because I’m not a musician and that’s a normal thing to do. From the looks of it I decided that any four words could be put together to make a cool band name because this is what I wrote,

Number one is my personal favorite.

This little exercise must have sent my mind a jogging (along with the marker fumes) because what I found on the next page was in regard to a band who sings my new favorite song, Kandi. The name of the band is “One Eskimo,” but I first want to take a moment and apologize to anyone who is or knows an Eskimo. They seem like wonderful people. This is what I wrote,

“New favorite song is by One Eskimo. Sounds like there is, perhaps, more than one Eskimo singing…possibly up to three, which begs the question how many Eskimos is too many?”

“I aint trying to narc on nobody, but I swear there has to be more than one of them damn Eskimos singing. This is deep. I need to mull over this for a couple of days.”

And, that’s it in a nutshell. I’m guessing the last two sentences were just little notes to myself. Hopefully next time I decide to journal in the middle of the night I will do a better job with grammar. I’m including photos of the actual pages for your enjoyment. Before you say it looks like the hand of a serial killer, let me remind you that I wrote all of this in total darkness. That’s my one and only defense. 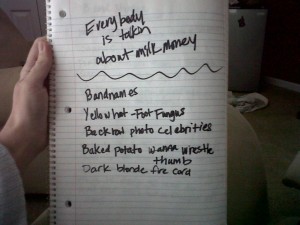 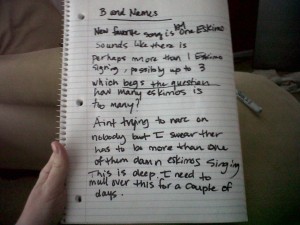 It’s been a while since I awoke with anything of interest written on my bedside tablet, until last night…
“Consider this, if you collected all of the left over ketchup packages after a fast food outing, you could turn around and sell them on E-Bay for a profit. This idea is copyright of the Lori Wescott Ketchup Company©.”
Cha-ching! I think my ship just came in.