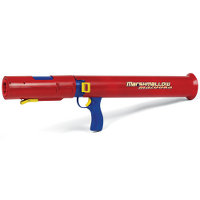 It was hardly the Red Ryder BB gun from A Christmas Story. “This is what I want for Christmas,” I told Brantley as I dropped the Hammacher Schlemmer catalog down in front of him.

Brantley: “I’m not getting you a marshmallow gun.”
Me: “Why not?”
Brantley: “Because you would use it even less than the night vision goggles you wanted last year.”
Me: “I had a reason for not using them but I never told you because I didn’t want to talk about it.”
Brantley: “Talk about what?”
Me: (in a whisper tone) “One night I heard something outside. You were asleep and I didn’t want to wake you, so I quietly opened the blinds and put on my goggles. That’s when I saw him. Standing in the woods behind our house was a man who was also wearing night vision goggles. He was staring back at me.”
Brantley: “I can tell your lying because your eyes are open.”
Me: “Alright, fine but the infrared function is all crappy. It’s not military grade.”
Brantley: “No, it isn’t military grade! Why should it be?”
Me: “If I had that marshmallow gun I could stalk through the woods behind our house at night WITH my night vision goggles. Not to mention I’ve always wanted to be able to say, hand me my gun…Sure do wish I had me a marshmallow gun.”
Brantley: “Sure do wish I had a real gun.