Our holiday cheer got a kick start over the last few days as we immersed ourselves in the grandeur that is the Gaylord Opryland Hotel. We visited the Dreamworks Madagascar Ice exhibit which was amazing in its own right. The giant ice slides at the end were a favorite of Brantley and Luke. I stayed far, far away from that slide. I was NOT going to break my by nose crashing into a block of ice.

Inside the ice exhibit it was a frigid eight degrees.  Some people wanted to take their time and see everything, but a quick walk through would’ve been good enough for me.  To my dismay, Luke was being defiant and Brantley decided to place him in timeout right then and there.  Considering the temperature I wondered who was REALLY being punished.

After the ice exhibit, we went back over to the hotel where Luke got to meet Po from Kung Fu Panda, Alex the lion, and King Julian from Madagascar, Shrek, Princess Fiona, and Puss in Boots. It was very magical, indeed. Luke also sat in Santa’s lap and told him what he wanted for Christmas.

MY favorite part of the trip would’ve been the beautiful hotel itself. If you’ve never been, it’s worth the drive. Waterfalls, rivers, and tropical plants combined with streets of shopping, and restaurants, all under the same roof. We ate at the Jack Daniels restaurant after hearing very good things about it.  Two of the items I ordered off the menu plainly stated that they contained lard, to which I replied, “Yes, and yes. Thankyouverymuch!” A couple of hours later I was haunted by the ghost of my gallbladder, but it was totally worth it. Totally. Worth. It.

Out of everything he encountered on our stay, Luke’s most favorite thing was the phone in out hotel room.  “Wook, Mom! It gots a cord.” 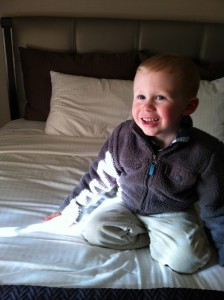 Hope you’re all making wonderful holiday memories with your loved ones. Merry Christmas!!