My little guy turned five a couple of weeks ago, and just like his Mommy, he managed to stretch out his birthday celebration for almost three weeks.

He was paid a visit from Aunt Heather and Uncle Sid, who came all the way from Mobile, AL. There was fishing, water balloon fights, and some serious arts and crafts. 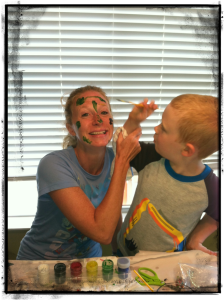 Then came visits from the grandparents!! Luke got to celebrate with each set of grandparents separately. It’s a pretty awesome thing when you have three sets! 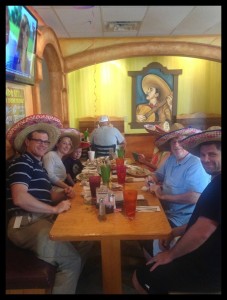 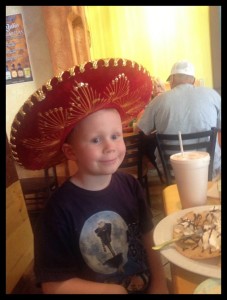 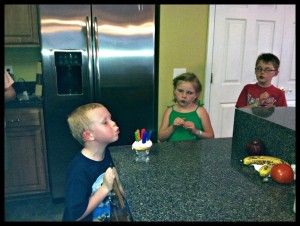 And after all of that celebrating, it was time to settle down and have some snuggle time with his Dad, his dog, and his new stuffed octopus. 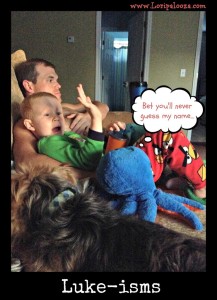 “Guess what I named my octopus, Mom?”
“I have no idea. What did you name it?”
“His name is Octopussy.”
(Mom gets up and leaves room.)

At my little sister’s behest, I went to Birmingham over the weekend to meet the rest of her bridesmaids. Having vowed not to take Luke on another road trip alone, we were accompanied by my loving baby Daddy. Brantley and Luke dropped me off in Birmingham at my sister’s house, and they proceeded to spend the day with my parents.

Fun was had by all. My older sister, Heather, was there and I got to spend some time with her and Leigh’s other bridesmaids, as well. We went to the downtown art walk, and then went to dinner. There was a lot of talk over where we would eat. Everyone wanted sushi. Then, someone said, “But, Lori doesn’t eat sushi.” Well, I wasn’t about to be the one that killed the whole night. I explained that I had only eaten it a couple of times, and that I just didn’t know what to order. I wasn’t worried about not finding something I liked. Like my son, I will pretty much eat anything. So sushi it was.

I had Heather order something for me because she knows my food likes and dislikes. Our entrees came and I dug in, sort of. It was disgusting. I cannot even describe the tastes and textures that were going on inside my mouth, but I didn’t say a word. “If this is what good sushi tastes like, then I’ll just be polite and eat my food,” I thought to myself. Heather looked over at my plate and asked for a bite. I said “yes,” but was thinking, “Someone, anyone, please take some of this food off my plate.” Heather gagged. “Lori, that’s disgusting. Have you been eating that? That’s really, really bad sushi.” My plate was sent back and I shared with Heather. When you add to that evening one-too-many glasses of wine, the damage to my body had been done.

When I got back to my parent’s house Luke was already asleep, but had an almost constant cough throughout the night. I laid in bed with him and could hear him wheezing from across the bed. He’s allergic to cats- two of which my parents have. However, in the past it has taken several days of exposure to bring him to that point. To make matters worse, we had forgotten (yes, forgotten) his inhaler when we changed suitcases at the last minute. After he had coughed and cried himself awake for the fourth time we decided we had to go home. The time was five-thirty and we had an approximately three and a half hour drive ahead of us.

We said our goodbyes and headed home in the car. What had just been a cramp in my stomach through the night started feeling worse. I have no idea how fast he must have been driving, but Brantley whipped the car into our driveway at 9:43 AM, and that was with four stops for me to throw up.

It was quite a whirlwind trip and I was more glad than ever that I hadn’t had to do it alone. Three cheers for Brantley who can add to his list of talents- blowing Luke’s nose as he sits in the backseat while simultaneously driving a car (with his knee), and holding my hair back.

When I think back to just one year ago, I’m reminded of a time of free expression- a time when I didn’t have to watch my back every time I opened my mouth. Alas, those days are gone and in their place I have been left with fear and intimidation.
“What kind of person could illicit such fear and anxiety from a grown woman?” you ask. Allow me to introduce you to Luke Wescott. While not quite four years old, this sly and stealthy son of mine has the ability to be everywhere at once. And, if there were a town called Bad Wordville, he’d be the mayor.
I walked through the living room yesterday morning with my coffee cup in hand. Luke was tucked away in his bedroom playing with his trains, and I only left him long enough to go downstairs for a quick refill. I was approaching the staircase when I stepped on one of his toys and lost my balance. I caught myself before falling, but as a result I spilled my coffee everywhere.
“$#!*,” I muttered under my breath. No sooner had I gotten the word past my lips did Luke emerge from the very next room. He darted around the corner with such gusto that his sock feet slid two or three feet across the floor before coming to a stop.
“Oooh Moooom, you said a bad word. I’m gonna call Dad at CVS and tell him, and you’re gonna get soap in your mouf. You better not say dat again in your whole wife. You unnastand me?”
“Yes, ok. I’m sorry, but you know what, honey? Moms can say words that kids can’t say.”
“No, it’s still a bad word. Dat’s a time out, Mom.”
I was clearly not getting anywhere with my argument so I sat on the stairs for a few minutes to think about what I had done. I wasn’t one bit sorry, though. Adults should be allowed to use four-letter words. I began thinking about how much I would love to debate him on the matter. I would totally win and have the support of Moms everywhere by arguing that parents should have the right to use their “power words” whenever they deemed it appropriate. The fact that my opponent couldn’t pronounce his L’s wouldn’t hurt my case either. I know that may be hitting below the belt, but I fight dirty…damn darn it. 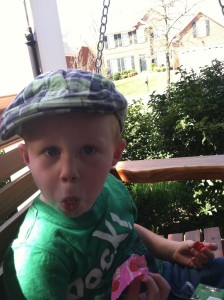 Brantley and Luke (3 1/2 yrs) were playing a solar system game on the Android tablet. When Luke would point out a planet, Brantley would tell him its name.
“What’s dat one, Dad?”
“That’s Uranus.”
“Mine? Wow! Hey Mom, dat’s my anus!” 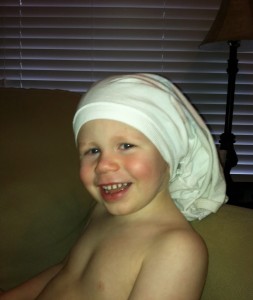 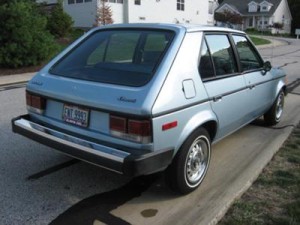 This post is an oldie but a goody from a couple of years ago.  Get out the cocoa because it’s about to get warm and fuzzy up in here, circa 1988!

I have fond memories of going to pick out a Christmas tree as a child. My parents, my two sisters and I would load up in our Dodge Omni and head out to what seemed like the wilderness. Most people bought their Christmas trees from a vendor in the Kroger parking lot, or went to a tree farm, but not us. Years later I would realize that we had actually been tree thieving trespassers on some strangers land, but what the hay. It was quality time together and that’s what mattered.

One year in particular, we found the most perfect tree. It was just right in size and shape. My Dad cut it down and strapped it to the top of our car and the five of us loaded back in. We were on our way home when my dad slowed down and pointed to a different tree on the side of the road. “I think that one might be better than the one we just picked, but I’m not sure if it’s big enough. Lori, would you go stand next to it so we can see how big it is by comparison?”

“Sure, Daddy.” My sisters and I had been singing Christmas carols in the backseat, but I was happy to stop singing and oblige my father. I even felt special that he had asked me, rather than my older sister. I jumped out of the car and ran across the dirt road. When I located the particular tree I turned around to face the car. At that moment I knew I had been set up. My entire family waved out the window at me and I could hear them laughing as my dad sped away.

I was eight years old and all alone, standing next to someone else’s tree, on someone else’s property like a big jackass. It doesn’t get much worse than that. Down the road I saw my dad backing the car up to come back and get me. I considered not getting back in, but I didn’t have a lot of options. My family had a good laugh at my expense. “You should’ve seen your face,” and “That was so funny!” was all I heard the whole way home.

“Yeah,” I thought. “Really funny”. I wish the police had driven by. I could’ve told them what happened and my parents would’ve gone to jail on Christmas. Trespassing, stealing, and child neglect- that would show them. I made the ride home as unpleasant as possible for everyone by singing Christmas carols non-stop, and at the top of my lungs. An hour and twenty minutes later we arrived home and they all clamored out of the car. I may not have abandoned them on a deserted road, but I had gotten under their skin and I took solace in that. My real revenge would have to wait, though. I knew there was a jolly fat man watching and I needed to act the part.

Flash forward about twenty years to a slight fear of abandonment. Go figure.