On May 10th, 2003 Brantley Wescott made the smartest decision of his life by way of marrying me. Congratulations to him on managing to hang on to me for nine long years.
The following is a poem that, I think, sums up our marriage thus far.

I was twenty when we met, and I asked him on a date,
But he almost blew it, showing up an hour late.
We were babies when we married, although we felt quite grown.
23 and 26, our wild oats not even sewn.
Five years later we found out that we had a baby brewin’.
Then along came a Lucas, who did my pelvis ruin.
Nine years we’ve been married now. It’s come and gone so fast.
Suck it, all you haters who said we wouldn’t last.
Now times are even better. Can’t wait to see what else is in store.
I think we’ll stick it out and see at least a few years more.
I wouldn’t change a thing, even if I had the chance, because
He still fits me better than my favorite sweat pants.
He’s my best friend and husband who romances me with the quip,
“Why spend money on a divorce when we can use it to take a trip.”
Now, here are some pictures of him with his clothes off. 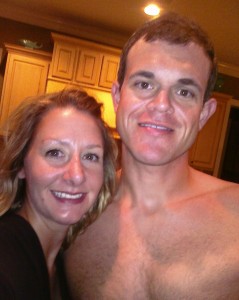 Happy anniversary, Brantley Wescott! And, don’t ever make me angry.

Picture if you will, a magical holiday world full of excitement and wonder, of beautiful twinkling lights and amazing Christmas spirit. Now, stop imagining that because that’s not what I’m here to talk about.
In the deep, dark woods of a rural Alabama trailer park lies a place known as Christmas Fantasy Land. The trailer park is aptly named “Shady Acres,”and therein lies a home occupied by a family named Blackmon.
Every year this family hosts a redneck feast for the eyes in the way of Christmas decorations. There you can find Santa’s sleigh atop the Nativity, and a ferris wheel next to an homage to Bonnie and Clyde.  My girlfriends and I have a tradition of going to this place every year, and 2011 was no exception. It’s hard to put this experience into words, but I will briefly try before showing the photos.
This year they had Snoopy and the Grinch alongside an oddly placed patriotic setup. There was an ice skating rink next to a multi-cultural display. There was a native American display near a country-line dancing scenario. (I never realized how much that group like to mingle.) To top it all off there was a stray cat that followed us around, that of all things, my son named, “Shame.” Ironic considering that’s what all of the adults felt for being there.
Enjoy the photos, but don’t try to make sense of them. You’ll get a migraine. There is also a poem at the end inspired by Twas the Night Before Christmas. It’s a must read.

Ode to Christmas Fantasy Land
Twas the night before Christmas, and all through Shady Acres trailer park
Some creatures were stirring out there in the dark.
Colored lights were hung from the clothesline with care
In hopes that spectators soon would be there.
The Blackmons were nestled all snug in their beds
While visions of meth-labs danced in their heads.
And Lori in her sweater, and LL in glitter shoes
laughed in the van while Mary Beth “tebowed” in poo.
Then out of the van there arose such a clatter
So they sprang to the window to see what was the matter.
Like a flash from the van to the front porch they flew,
and posed with our sign, “In memory of Ma-Ma. We love you.”
From the steps of the porch they had quite a ball,
Then dashed away, dashed away, dashed away all.
They spoke not a word when a sign did display
In tensil and Sharpie, “God Bless the USA.”
And placing their hands across their laughing mouths
They emitted chuckles heard all over the south.
They sprang back to the van and sped off in the dark
And threw up gravel all through the trailer park.
And I heard them exclaim as they drove out of sight,
“Lock the doors so we all don’t get murdered tonight.”