You might not believe it, but I ventured to the circus over the weekend.  As many of you know, the circus is a place I have felt great contempt for in the past.  The elephant poop, the uncomfortable seats, eighty dollar funnel cakes, and scary clowns always left me with a feeling of sensory overload and nausea.  However, there comes a time in your life when you make sacrifices for your kids.  For me, that time was Sunday at 10:00 AM.

For the patrons who arrived to the show early, there was a preshow on the circus floor.  It was a chance to see the dancers, acrobats and elephants up close.  Luke LOVED it.  At two and a half years old, I wondered if it would be too much for him, or if he would be afraid of the clowns.  My wonder ceased with the start of the first act.  There wasn’t a clown in sight during the pre-show.  He loved watching the acrobats fly through the air, and when that was over, they invited all of the kids into the ring for a dance party.  They had barely gotten the words “dance party” out before Luke had dived over the barrier and was front and center in the ring.  Rather than standing with the other kids, Luke went to the front and stood next to the instructor while he shook his groove thang.  This was the highlight of the circus for me. I’ve said it before, and I’ll say it again.  I won’t rest until that kid knows how to pop and lock. 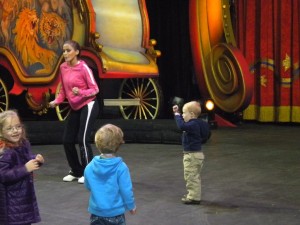 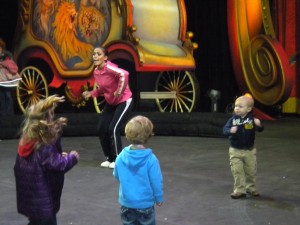 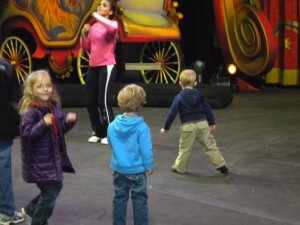 Of course for the real show, there were lots of animals- tigers, elephants, llamas, donkeys, a dog that rode a horse, and of course, camel toes on each of the acrobats.  They debuted motor cycles in a cage, clowns, a strong man, and a midget named Nano.  All in all, it was very entertaining, and had Luke not tuckered out, we would’ve stayed for the whole show.  The elephant excrement I had expected to smell was nowhere to be found.  Thanks to whoever cleans up that mess, because they did a really good job.  I was also pleasantly surprised that no one’s epilepsy seemed to be effected by the flashing lights.  My only disappointment was not getting to see the midget stick his head in a tiger’s mouth.  I was really hoping for that.  Damn you, OSHA.