Luke’s class is reading a new book about frogs. When I picked him up from school yesterday he was very excited to share his new found knowledge of frogs with me.

“Mom, did you know that when frogs are babies they don’t have wegs yet? They have tails and they’re called tampons.”

“I think you mean tadpoles, sweetie. Baby frogs are called

The little professor disagreed with me until we finally settled on calling them “tad-puns.”

Parenting is all about choosing your battles.

After school yesterday Luke and I ate lunch in the backyard as we talked about his day.

“I played super heroes with my friend, Jalen at school today. He was The Shark Slayer.”

“Ooh, Shark Slayer sounds pretty cool. What were you?” I asked.

Dear God, please look over and protect all of the good guys who fall under the safety net of any super hero named, “Super Claw Puppy.” Amen.

I picked up Luke from school yesterday and it was apparent he wasn’t feeling well. It was his first day back and he had been there a mere three hours. By yesterday evening he was complaining of his back hurting. With all the talk of flu going around I was not excited to hear that. He ran a low grade temperature and went to bed early.

When he got up this morning he was covered in an itchy rash and felt really hot. I took his temperature and shouted downstairs to Brantley. “It’s 101 degrees!”
“Damn!” Luke replied. He had obviously not lost his spirit.
“What did you say?”
“Nuffing. You wook fancy.”
“That excuse will only work so many times, Mister.”

Brantley and I took him to the doctor where he was diagnosed with strep throat and Scarlett Fever. In all my years of nursing I’d never seen Scarlett Fever. Poor kiddo. It looks rough. However, despite his itching and clawing, headache and fever, he still wanted to show everyone in the office his dance to Funky Cold Medina. He did the whole thing complete with ground routine, but I have to admit that it didn’t have its usual pizazz. I’ll forgive him this time.

(To be clear, Luke’s never seen the video.)

“Luke, what did you learn at school today?”
“I wearned that OJ is Spanish for orange juice.”
(Public school. What are you gonna do?)
“No, honey. It isn’t.”
“Yes, Mom. It is.”
“Ok, then. I’m thirty-two years old and you’re four and a half, so if anyone should know it would be you.”
“Exact-wee.”

I check Luke’s folder every day after school to see what treasured artwork he has brought home. Sometimes it’s great, but other times I can tell he didn’t give it his all. Those are the ones that go straight into the garbage. Just kidding. Or, am I? I am not. 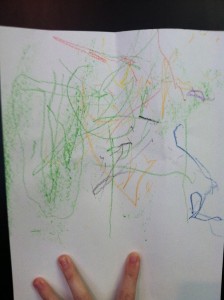 Last week I found this in his folder. I was totally impressed. I said, “Oh my goodness, Lucas! This is wonderful. I love the colors. It makes me feel like I’m in a garden. Is that a letter “H” there, and a “U” over there?”
He slapped his hands over his eyes, then quickly snatched the picture out my hands in disgust. “Mom,” he shouted, pointing to the middle of the page. “This. Is. A. Chicken!!!”
“What a shitty chicken,” I thought to myself. “Well you know what, buddy? I have a special place that’s just perfect for a chicken like this.”

So this was sent home yesterday. 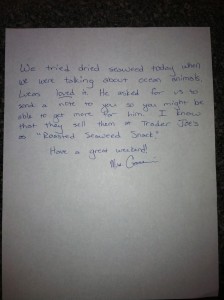 It reads,
“We tried dried seaweed today when we were talking about ocean animals. Lucas LOVED it. He asked for us to send a note to you so you might be able to get more for him. I know that they sell it at Trader Joe’s as “Roasted Seaweed Snack.” Have a great weekend!” 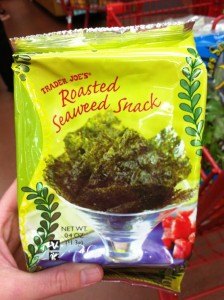 I’m sure this will pair nicely with a 2012 apple juice.

Brace yourselves because I’m about to drop a bomb. Luke received his first time-out in preschool this week. It’s taken me several days to come to terms with this enough to write about it. Where did he learn that it was ok to spit? (I blame rap music.)
Believe me when I say that the buck stops here. Today’s time-out is tomorrow’s juvey, and we all know there’s nothing hokey about the pokey. 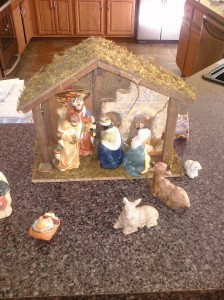 This is how Luke (2.5 yrs old) thinks our Nativity scene should be set up. Notice Mary and Joseph are back to back, most likely not speaking to each other. Was it an argument over sending baby Jesus to public vs. private school? I can’t be sure. Poor baby Jesus is out in the cold with the animals, wearing nothing but swaddling clothes. Shame on Mary and Joseph. It would take Child Protective Services awhile to get there because they too, were following the star. My favorite part of the scene, however, would have to be the creepy wise man that is lying on his side, peering in at Mary through the window.
This is not how I imagine things happened after the birth of baby Jesus, but then again who’s to say. Life is always a lot more interesting when you’re seeing the world through Mr. Potato Head glasses. 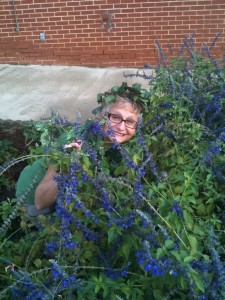