“Luke, what did you learn at school today?”
“I wearned that OJ is Spanish for orange juice.”
(Public school. What are you gonna do?)
“No, honey. It isn’t.”
“Yes, Mom. It is.”
“Ok, then. I’m thirty-two years old and you’re four and a half, so if anyone should know it would be you.”
“Exact-wee.”

The Wescott home is undergoing some updates. We are replacing all of the floors upstairs which has rendered me unable to use my bathroom, and left me feeling somewhat displaced. In preparation, Brantley removed the toilets and placed them in the shower so the tile could be laid. He was very pleased with himself over having done this, and informed me of the situation by saying, “I have a surprise for you in the bathroom.” Finding a commode sitting in the spot where I normally clean myself is not my idea of a good surprise, but what do I know.

To ensure that the workers do their very best job I am constantly forcing Gatorade and snacks on them. This, however, has led to several awkward encounters. Despite the fact that they all speak fairly good English I first communicated with them by shouting and doing sign language. Realizing how dumb that was, I then shook my head and quoted the Ricky Ricardo refrain, “Ay, ay, ay.” Later in the day when one of the men walked out the front door, Baxter used the opportunity to make a run for it. I’m sure they were impressed with my Spanish when, after retrieving him, I said that Baxter can be very “Andale.” 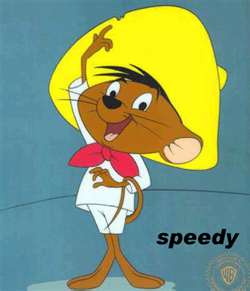 Brantley now asks that I leave the workers alone. It’s probably not a bad idea. 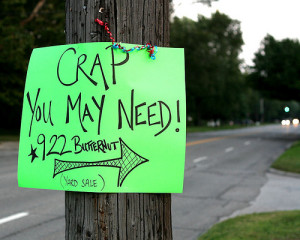 Yesterday I had a very successful yard sale-palooza, but since I don’t speak Spanish, I was challenged by the Hispanic patrons. How exactly do you say, “No I won’t take $1 for this Jones New York cashmere sweater. You have insulted me and my family. Now get off my land?” Despite my ignorance for the young woman’s language, I improvised by shaking my head vigorously and saying, “Not less than two dolareemos.” I’m pretty sure my raised voice and exaggerated mouth gestures helped penetrate the English-speaking portion of her brain. I’m not stupid. I know they all have one.  She then stole a headband.
Later, a Hispanic gentleman took a fancy for a comforter I had for sale. It was marked $10, but he used what little English he knew to ask if I would take $5. “Seven,” I said firmly. He put it down and got back in his van. Not wanting to lug the king size comforter to Goodwill with everything else that didn’t sell, I shouted, “I’ll take cinco!” He got out of his van and paid me cinco.
Despite the occasional language barrier, I managed to score a couple hundred dollars and unload a lot of stuff I no longer needed. More importantly, I earned another grown-up badge for planning and carrying out a successful yard sale. That makes two badges this year when combined with my grown-up badge for finally getting window treatments for my house. At this rate, I’ll have enough badges to be a mature adult by the time I’m forty.
Adios, amigos.