You’ll be happy to know that Luke is feeling better from the viral torticollis he developed over the weekend. If you haven’t read about it yet, then grab some Kleenex. It’s a real tear jerker.

It wasn’t enough that I had to relinquish my Tempur-Pedic neck pillow to him, but he added insult to injury when he asked me today, “Am I your favorite grandson?” and “Back when you were a kid did people drink chicken juice?”

What a punk. He’s going to have to learn NOT to insult the person in charge of giving him neck massages. 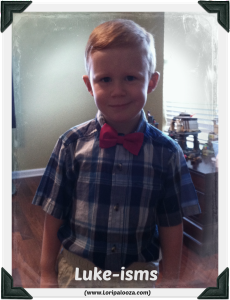 Luke (4) had been battling an asthma flare-up for several days. My husband, Brantley and I had been giving him breathing treatments every four-hours in addition to the two steroids he had been placed on.

His symptoms had begun to improve until yesterday morning around 9am when he complained of a headache. By ten o’clock the pain had spread to his neck, which had quickly become so stiff that he was unable to turn his head.

I called the pediatrician who we had seen last week when the asthma flare-up started. He told us to go to the Children’s hospital emergency room so Luke could be examined. He was going to call ahead and let them know we were coming.

After a thorough exam, the attending physician, Dr. Arnold explained that Luke didn’t have meningitis, but a condition that caused inflammation and spasm of the neck muscles. This condition, torticollis, was actually caused by the viral upper respiratory infection that he’d been battling.

Our instructions for treating this was to alternate Tylenol and Motrin and to massage the muscles of his neck to help them to relax. Otherwise, his neck would stiffen back up, drawing his left ear over to his shoulder.

Brantley and I breathed a sigh of relief and we headed home with our little patient.

We prepared for a day of rest and relaxation for Luke. Brantley heated up his favorite blankets in the dryer while I got his favorite Scooby Doo videos to watch in bed. I gently rubbed Luke’s neck, which he didn’t like at all because the spasming muscles made it painful. I hated having to do something that increased his pain, but I knew that it would help in the long-term.

“Mom, can I use your Tempur-pedic pillow?” Luke asked.

“Bitches be trippin,” I thought to myself as I grabbed my Tempur-Pedic pillow and held it tightly to my chest.

Yes, he was under the weather, but had he really just asked if he could use my Tempur-Pedic neck therapy pillow, aka The Precious?

“Here Puddin’ Pop, why don’t you try one of your Dad’s really soft…”

“Lori,” Brantley interrupted. “You’ve got to be kidding me! Give him that pillow,” he said through gritted teeth.

“I was just warming it up,” I lied as I relented and allowed the marshmallowy softness to be taken from my tight grasp. “Anything for my boy.” 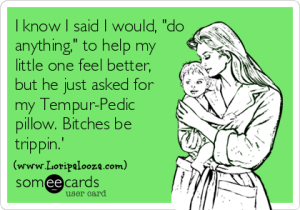 As I sit here this morning with a crick in my neck from sleeping on a standard pillow, I want to hear YOUR story. You know you have one.

I want to hear about it. No judgement. I’m kidding, of course. I will totally judge you. We are humans, after all and we LIVE for shit like this. Go on and share. Make me feel better by comparison.