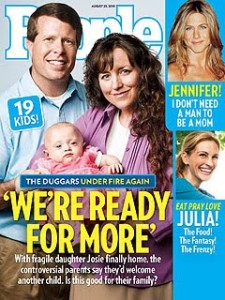 Mom, Michelle Duggar, of TLC’s “19 Kids and Counting!” announced recently that she and husband Jim Bob are open to welcoming their twentieth child into the world. Holy episiotomy, Batman! Is that a uterus or a clown car? Their youngest child was born in December 2009 weighing in at a whopping one pound, six ounces and almost four months premature. Michelle apparently became pre-eclamptic in her twenty-fifth week of pregnancy resulting in a C-section delivery of baby, Josie, followed by a lengthy hospital stay. It’s almost as if her body was trying to tell her that she wasn’t meant to incubate and spit out an entire gaggle of healthy children, but don’t ask me. I’m not a doctor.

And how Jim Bob and Michelle keep their names straight is anybody’s guess. They were smart about it, though by picking one letter of the alphabet and sticking with it. “That’ll do. All of our kids’ names will start with the letter J.” A great idea in theory, but now the J-names have run out leaving only “Jumping Jehoshaphat,” “Jimmie Crack Corn” and “Jeepers Creepers.” I’ve got money on Jeepers Creepers.

Will 2011 bring another Duggar child destined to hear their parents say, “Put your flannel shirt back on and get your eleven fingers off of your sister’s third nipple?” Only time will tell whether they become parents for the twentieth time and we’ll find out the same way we always do. First thing in the morning on the Today Show, your coffee not even kicked in yet. You’ll drop your cup, grab your crotch and say a prayer. It’s just another addition in the Duggar three ring circle of life. Good luck keeping a possible tenth daughter off the pole, Jim Bob.