It’s been said before, but I’ll say it again. I’m not big on romance. I don’t want anyone to gaze endearingly into my eyes unless they have challenged me aloud by shouting, “Staring contest!”

Valentine’s day for the husband and I involves zero expectations. It isn’t like Christmas when we say we’re going to keep our gift exchange low key, then both of us secretly and simultaneously do the opposite. We literally don’t observe it and I LOVE that.
Our son on the other hand is a hopeless romantic.
“I love valentime’s day,” he tells me.
“What do you love about it?”
“Because it’s all about love. I can’t wait until me and my wife live here without you and Dad.”
“Why can’t your Dad and I stay here. This is our house, too.”
“Mom, you have your own husband. You need your own place.”

I ran up the stairs and before slamming my bedroom door I shouted, “I hate you! You’re not even my real kid!!!”

OK I didn’t actually say that, (to his face) but lately he’s been obsessed with talking about his wife and I’d probably be more concerned if it weren’t for the fact that his wife is a stuffed dog.

It makes absolutely no sense, but a few weeks ago he announced that he had a wife and that she was coming for dinner. She has been at the table for every family meal since then. She’s proving to be a persistent gal.
I do my best to ignore it when he talks about her, but this week he insisted on taking her to school for show and tell. Believe me I tried, but there was no talking him out of it.
When I picked him up from school his teachers were very amused. They had been hearing great things about his wife for weeks, so naturally they were excited to finally meet her.
On the ride home I said, “How was school?”
“It was good,” he said nonchalantly, “except that Owen punched my wife.”
I spit coffee all over my steering wheel as I guffawed with laughter.
“Mom, it isn’t funny.”
Of course it wasn’t. There’s nothing funny about domestic abuse. BUT IT WAS because his wife is a stuffed pug. I don’t even mind admitting that I’ve punched her a couple of times, myself. She’s mouthy.
Thankfully, I’m friends with Owen’s Mom. When we got home I sent her a text explaining what had gone down and to let her know that her son was a wife beater. No big deal. Thankfully, I had relocated myself to the office where I was pretending to check my email so Luke couldn’t hear me laughing. Owen’s Mom responded back with, “Tell your son to keep his wife at home from now on unless she wants to get punched again.”
The mere image of his Pre-K classroom being rocked by such a scandal had me laughing so hard that tears streamed down my face and I could barely catch my breath.
They grow up fast in Brentwood, TN.
How do teachers manage to keep it together? I bet it’s alcohol.
Happy Valentine’s day!!
xoxo
Lori 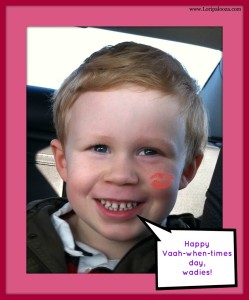 I believe Valentine’s Day is a made up holiday perpetrated on consumers by the candy, greeting card and medical industry in an effort to have us needlessly spend money. Those with partners fall for it hook, line and sinker with Godiva chocolates, and cheesy cards about love. Those without partners unnecessarily decide they must have a partner, if only for one night. That person then goes home with someone from the bar, catches a germ that won’t wash off, and shows up at their doctor’s office for treatment three to four days later.

One of the many things I love about my husband is that he is as unromantic as I am. Most women would’ve been appalled at the question he posed to me last week regarding Valentine’s Day.
“Hey, instead of getting each other Valentine’s Day cards this year, can we each throw five dollars in the garbage can? That’s where it’ll go the next day, anyway.”
My heart swelled with pride. “You complete me.”

I don’t need a specific day of the year to remember that I have the most wonderful husband in the world (when he isn’t being a butt hole). Happy VD everyone.

It’s already February and I have to say that I have been cracking away at my winter bucket list and New Year’s resolutions. Here are a few accomplishments that really solidify my my swagger.

I want to hear about YOUR winter accomplishments. Sound off!!