Luke (4-1/2) and I have the crud. I don’t think it’s full blown, or as bad as others have had it, but he can’t stop coughing and I have a jackhammer in my head. Also, it snowed last night. < Throws pretend confetti in the air.> Yea. It was just a dusting, but enough for schools to close. So while others are posting their Facebook pictures of six inch snow men, we’re stuck inside enjoying each other’s company. (Read: trying not to kill each other)

If anyone else is lucky enough to be in the same predicament let me offer some suggestions of things to pass the time. 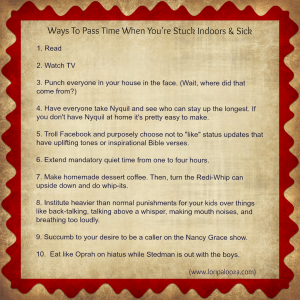