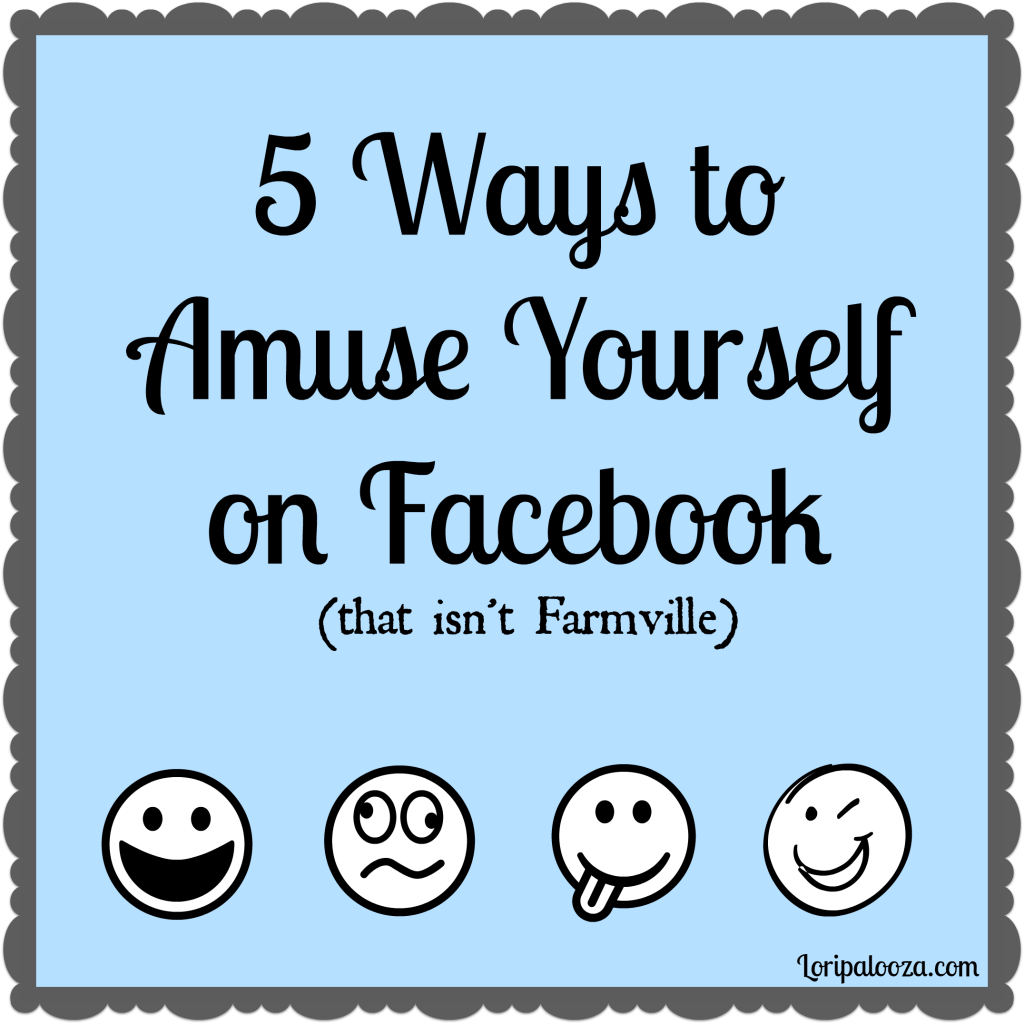 Over the recent years, Facebook has given us a multitude of ways to entertain ourselves. With the touch of a button we can keep in touch with loved ones, stalk our exes, and find the answer to burning questions like, “What might my friends be cooking for dinner tonight?” Facebook isn’t without its drawbacks, however. It’s also the place people turn to when they need to air misplaced grievances about well, anything. Politics, religion, personal family matters, requests to diagnose my rash- it’s all on the table. I hear more people every day complaining about the social media site and making thinly veiled threats of shutting down their accounts for good. These are generally the same people who will post a photo of their ingrown toenail accompanied by a prayer request the following day.

So what keeps me coming back to Facebook time and time again? I’m glad you asked. Here are five ways I utilize Facebook for endless entertainment. 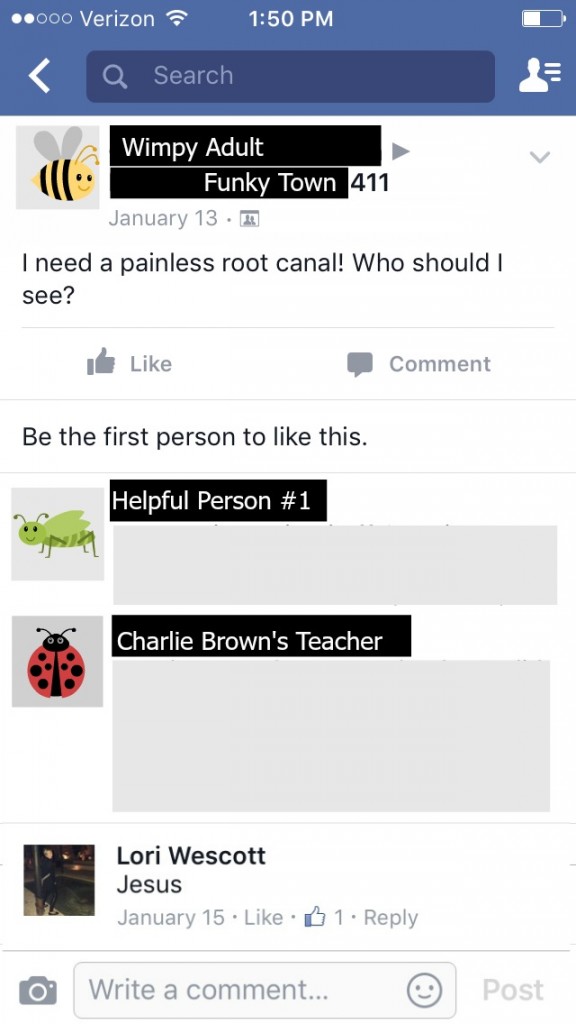 #2- Tag your friends (without their permission) in discussions that have nothing to do with them in an effort to make them appear sketchy. 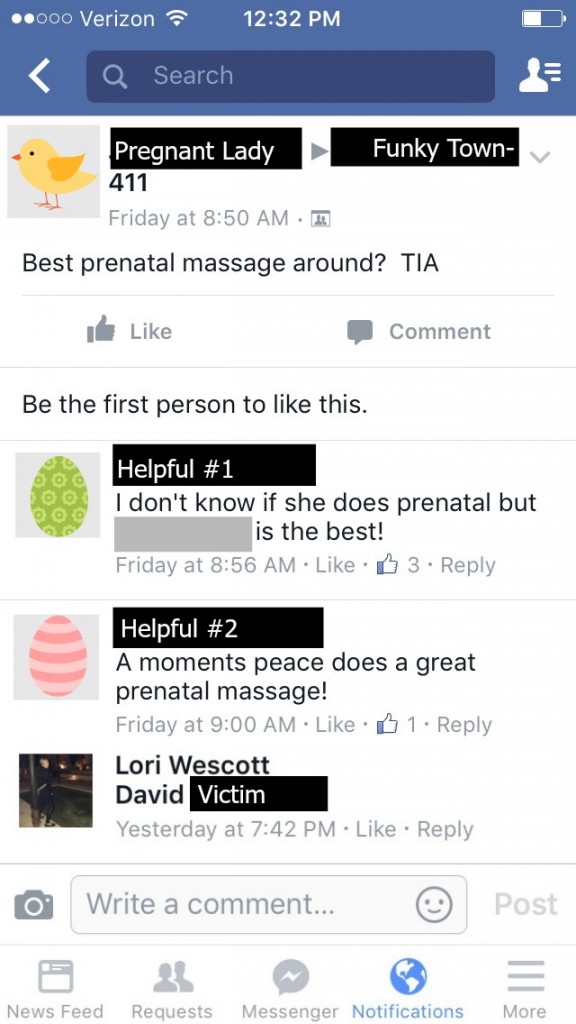 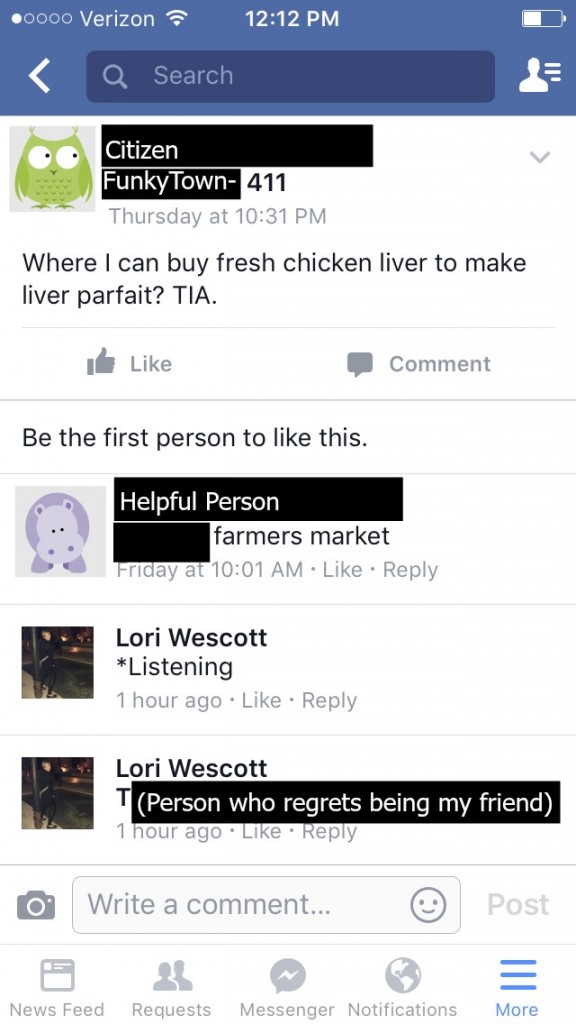 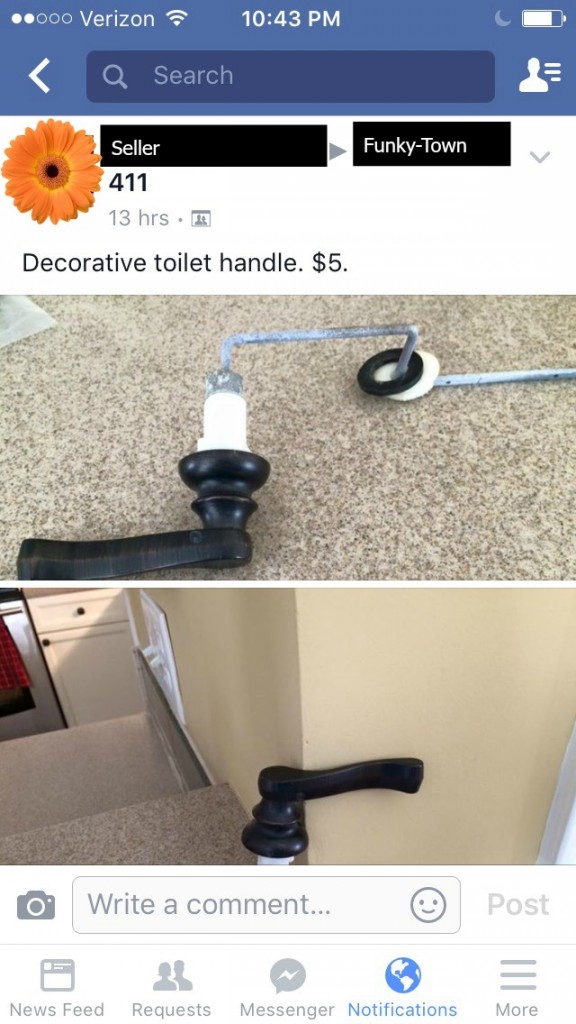 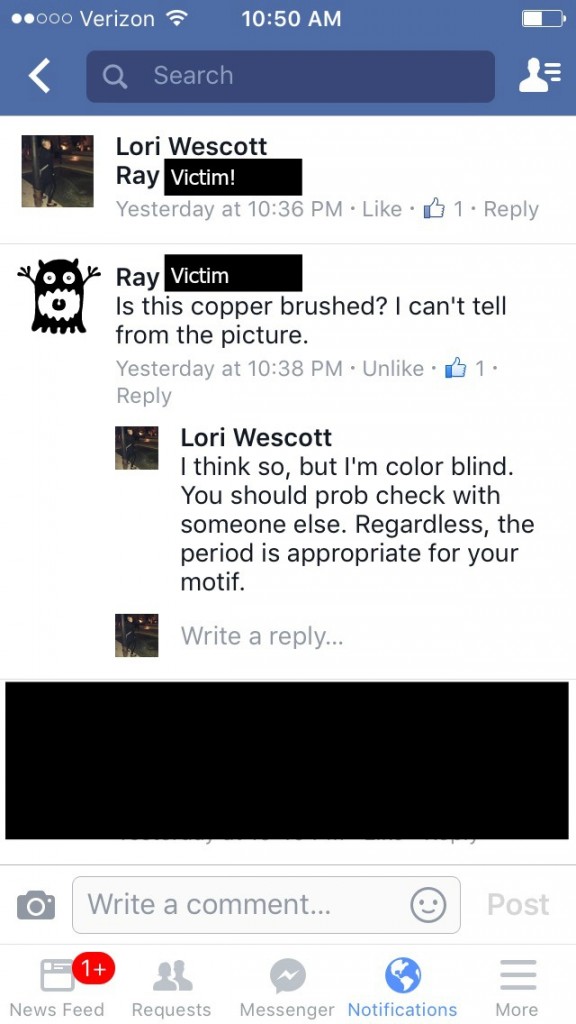 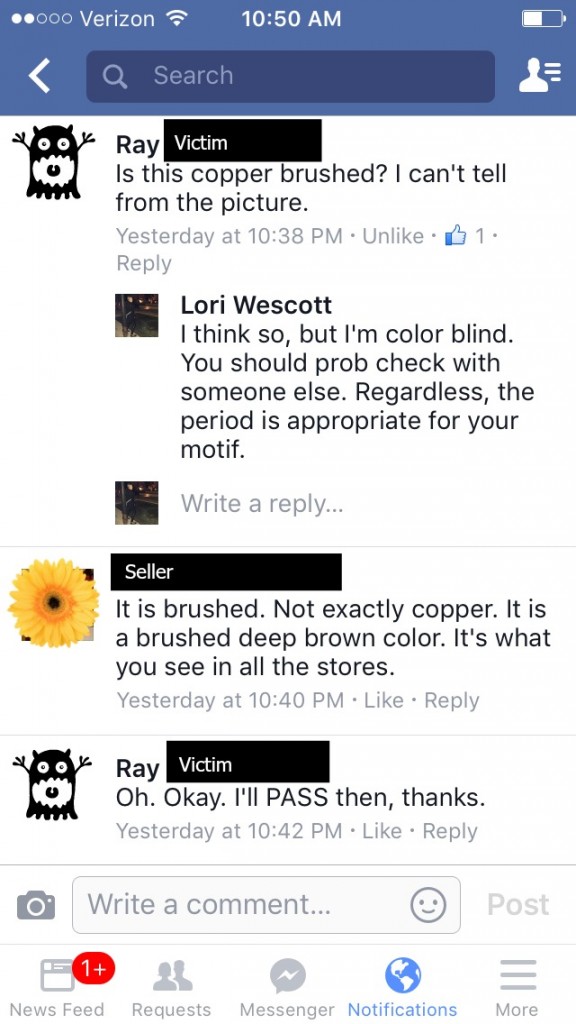 #3- Jump into a discussion that has nothing to do with you by making a completely unrelated AND polarizing comment. If you’re lucky someone will “like” your comment and agree with you (which is completely stupid). Stumped for ideas? You can always go with Obamacare, global warming, or anything Jesus-related. 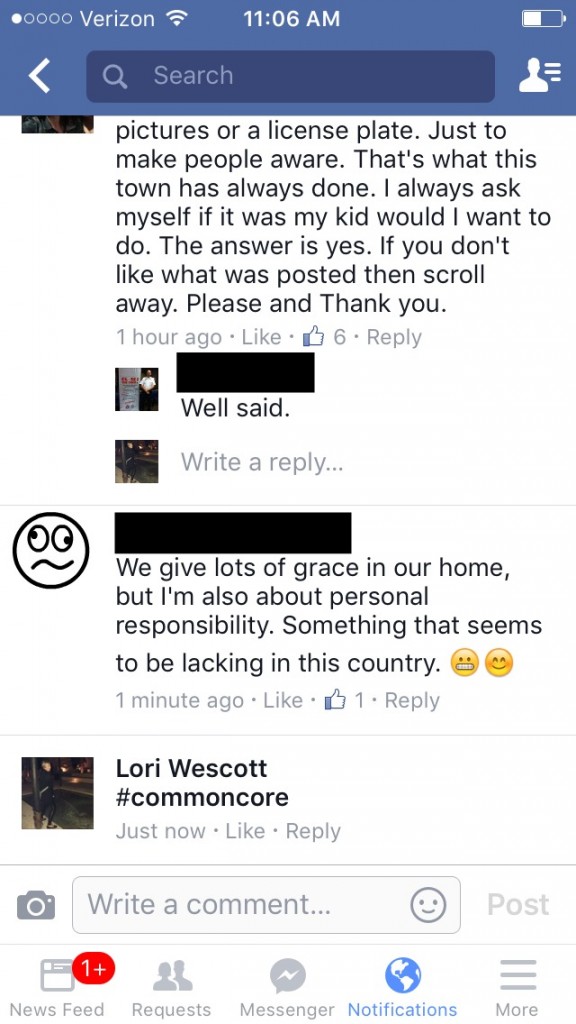 Did I hear you say that you sailed through numbers one through three and that you’re ready to raise the stakes a little? I’ll take that as a silent yes.

#4- Search your local community page for a heated debate filled with self-righteous comments. (Tip: These are easy to spot because they have the most comments.) After reading through the original post and some, not all (We have other things to do. Am I right?) of the comments pick a side. It doesn’t matter which one. Once you’ve chosen a side, post a comment that vehemently expresses your agreement with some of the people, while at the same time makes you look like an unscrupulous asshole.

(Not recommended for anyone seeking employment in the near future.) 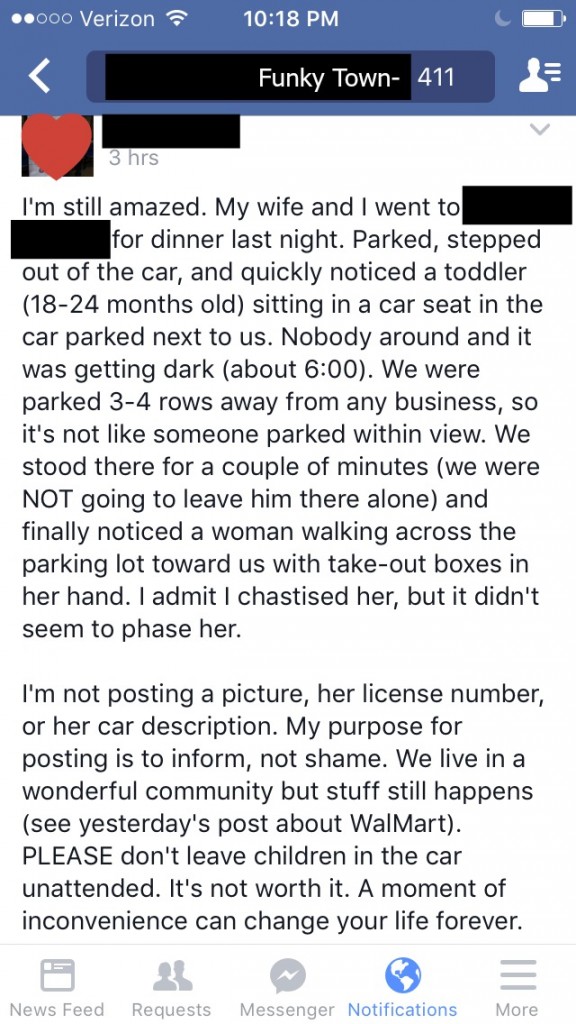 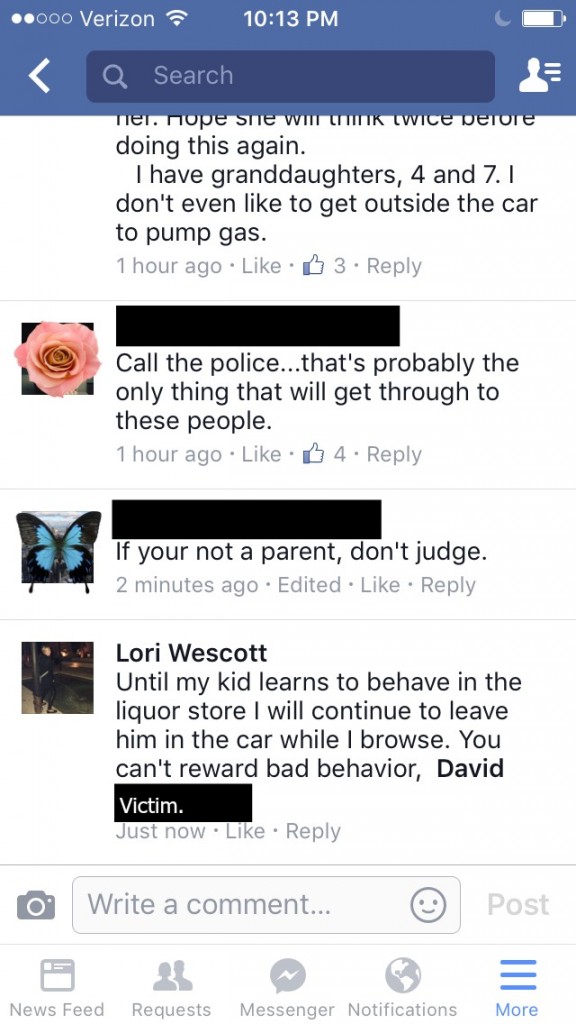 Double-whammy!! As you can see, I completed number four while also incorporating number two- tagging a friend. (Haha! Number two…)

#5- Post a vague ad on your community’s page attempting to sell items that were recently stolen from your neighborhood. This one is a real crowd pleaser! 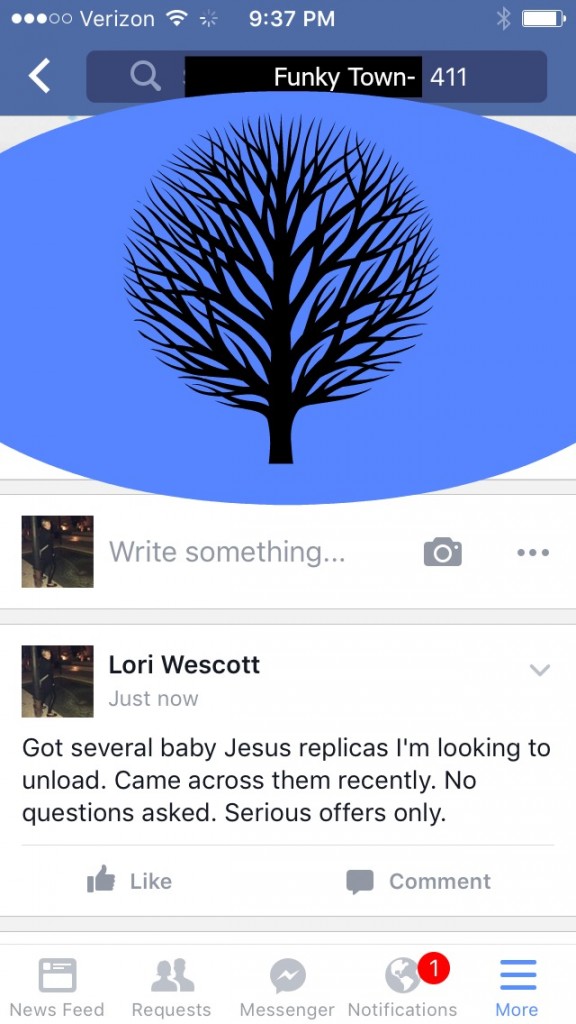 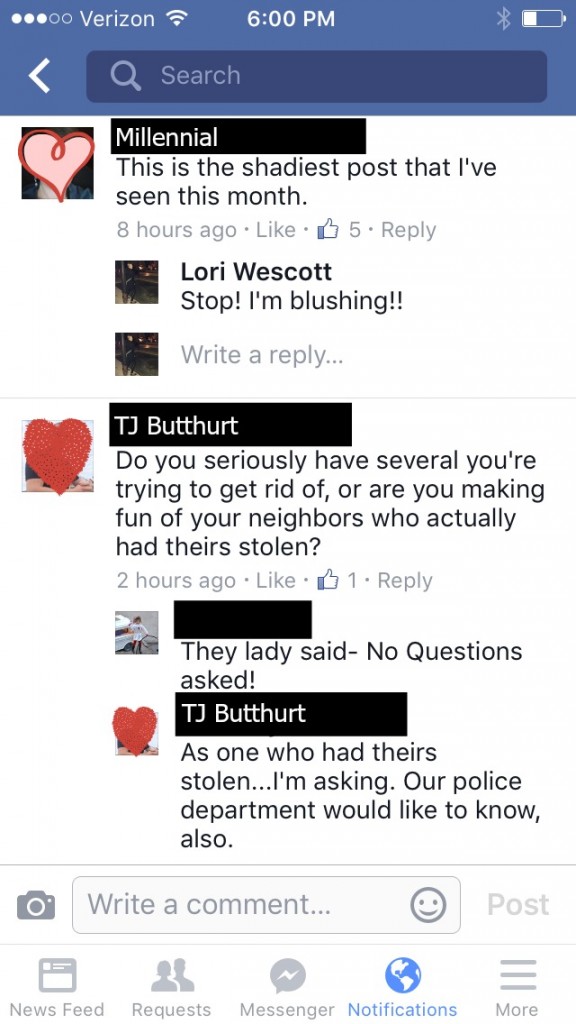 And the fun just never stops!

I hope you’ve enjoyed this Loripalooza tutorial on Five Ways To Amuse Yourself On Facebook. I know I have! Now, get out there (while you stay on the couch) and have some fun.

For more DIY entertainment: How To Beat the Winter Weather Blues

Welcome back to egocentric community of Withering Lows. A lot has happened since neighbor, Shane lost it a few weeks ago after finding litter on the running trail. I’m assuming he didn’t make good on his threat to quit his job and monitor the neighborhood for hooligans, but who knows.

Irene lives just a few houses down and found herself in the midst of her own conundrum just last week. She needed to defecate badly, but the cleaning ladies were still at her house. Naturally, she took to the Facebook HOA page to ask for advice on what to do. (Personally, I would’ve just Googled it, but different strokes for different folks, as they say.) There was a range of responses including “Go next door,” “Drive to the BP station,” and “If you have a privacy fence, then do it in the back yard.”

There was no official word on how it played out, but rumor has it that when Consuela opened the door to the butler’s pantry to dust the counters she found Irene squatted over a paper sack. Please pray for all of those involved.

The Facebook HOA page became another hot bed of controversy two nights ago when Jean got into it with a few of the other neighbors over premature Fourth of July fireworks.

Here is their conversation for your reading enjoyment.

Jean: To all of you who think it is ok to shoot fireworks tonight… a week ahead of the fourth… think again. My pup is traumatized without any warning. We were prepared for the actual fourth, but now it may be too late. Please be considerate.

Neighbor 2: Dogs get used to them at some point. Shoot ‘em off. And it’s TWO weeks before the fourth.

Sandy Vagina: Obviously, Neighbor 2 doesn’t have any compassion for animals.

Neighbor 4: My dog hates them, too.

Neighbor 5: Popcorn in hand. This is going to be good.

[Insert ten more comments for and against shooting off fireworks before the Fourth of July.]

Neighbor 16: You should be more considerate. It sounds like you’re asking Americans not to celebrate their independence.

Me: My dog is afraid of fireworks AND thunder. While you all took care of the fireworks situation I fired off an angry email to God about that thunder. He has yet to respond. Whew! It takes a village.

In unrelated news, last week Boko Haram was suspected of kidnapping another 90 women and children in Nigeria, mystery still surrounds the missing Malaysian flight, and the U.S. traded five high-ranking Taliban terrorists for one American POW. However, in what turned out to be the biggest news story of all, one of the Duggar kids of the TLC show Eleventy-Thousand Kids And Counting got married, had her first kiss, and found out that THAT isn’t how babies are made.

Once this whole fireworks debacle gets worked out, I’m sure these new stories will find their way through Withering Lows iron gates just as swiftly as the New Kids On The Block- Greatest Hits album sweeps through Russia. 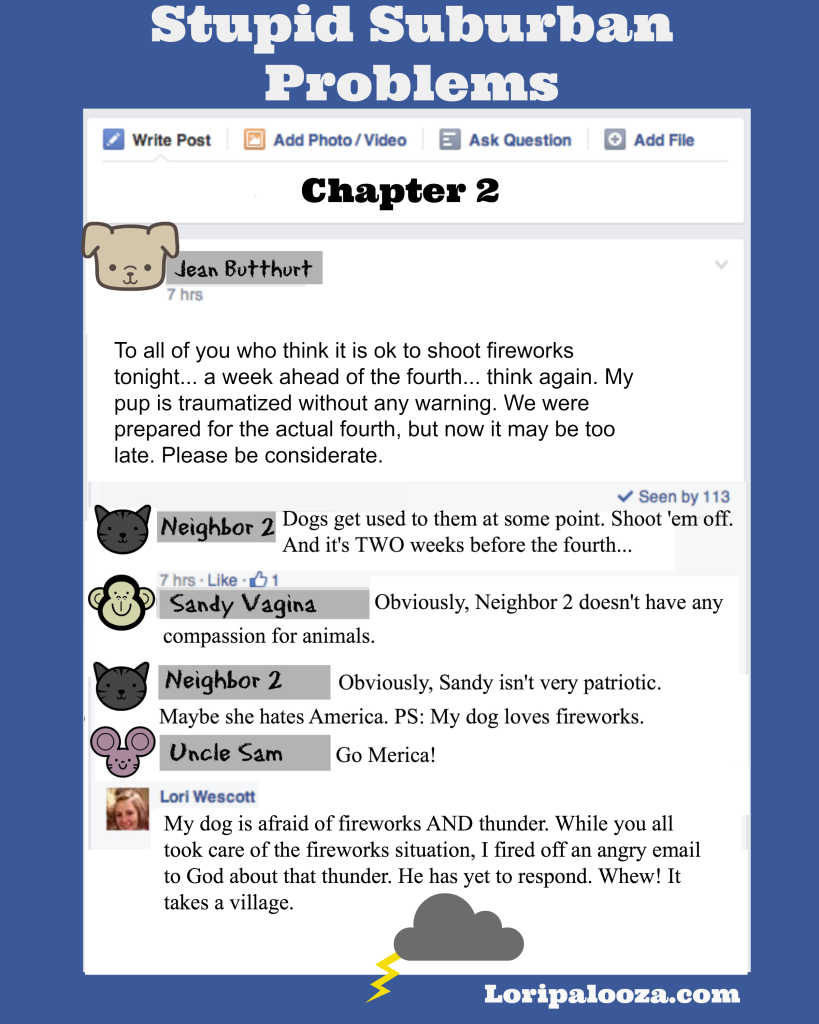 With today’s twenty-four hour news cycle it’s hard to escape the almost constant barrage of atrocities occurring around the globe. I, for one, have a hard time sweating the small stuff when people I know and people I don’t know are hurting- suffering from untreatable illnesses, the victims of mass kidnappings, genocide, and continued inequality. However, when things start to look a little too bleak there’s a place I can always turn to. It’s not as far away as you may think, either.

Not far outside of Nashville resides a quiet suburb community called Withering Lows. It only takes a quick peek at Withering Lows Facebook page to tell that this isn’t a community concerned with other people’s problems. No, they have bigger fish (of their own) to fry.

Today’s story takes us into a day in the life of a man I’ll call “Shane.” Shane is God-fearing man’s man who doesn’t believe in cussing. No sir.

However, Shane’s limits are about to be tested when he encounters something on his morning run through the wooded neighborhood trail. It’s a straw, and it just broke his camel’s back. Read for yourself, but keep in mind that his words are unedited. Personally, I envision his entire message being shouted, so I can only assume that the sections in ALL CAPS were written while simultaneously firing an assault rifle into the air.

Shane: “OK residents I think I have seen enough. While running this morning, I came across the remnants of a bonfire on the walking trail. GIVE ME A BREAK. Do I have to quit my job and sit in a lawn chair to watch the subdivision each day. The speeding, the profanity, the way we address issues. The Board is getting overwhelmed with this type of..sorry but CRAP. I know that I will be bombarded with comments soon, but this is getting old. We were voted one of the best subdivisions around and we act like this. If you see something, take the time to address it please and not wait till we have a “mob” of complaints.” 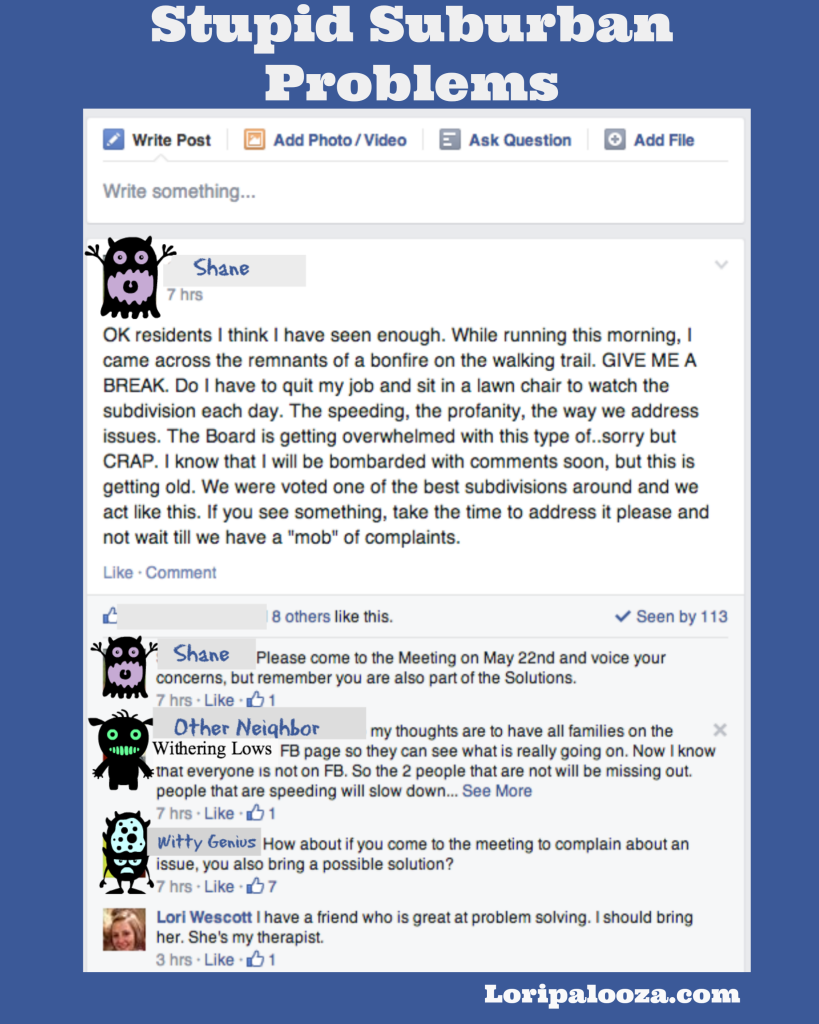 First of all, I just want to thank Shane for being so brave. He didn’t have to share this story, but for some reason he did.

After reading this last night I was overcome with worry. I didn’t fall asleep until after ten o’clock and when I did I had a nightmare. In this nightmare, no one heeded Shane’s warning and he DID QUIT HIS JOB and buy a lawn chair. It was awful. All over the neighborhood dinners were burning and children weren’t being picked up from soccer on time. I ran to the aid of a woman in distress and I don’t think I’ll ever get her screams out of my head. “Why don’t we have a neighborhood pool?” she kept crying. I urged her to be strong for her family and not to think like that, but she continued, “I know we were invited to join that other neighborhood’s pool, but it isn’t really OURS. Nothing is ours!”

I still have a lot of unanswered questions, like How does Shane quitting his job somehow a threat to anyone but him and his family?

This concludes today’s look into Stupid Suburban Problems. Stay safe out there.

For those of you who have missed the last few posts coming to your email inbox, you can find them by clicking below.
How to Behave in Public: Lesson 1- Target
Luke and Sadie: A Relationship Rollercoaster
Comedian Kevin Nealon Comes to Nashville