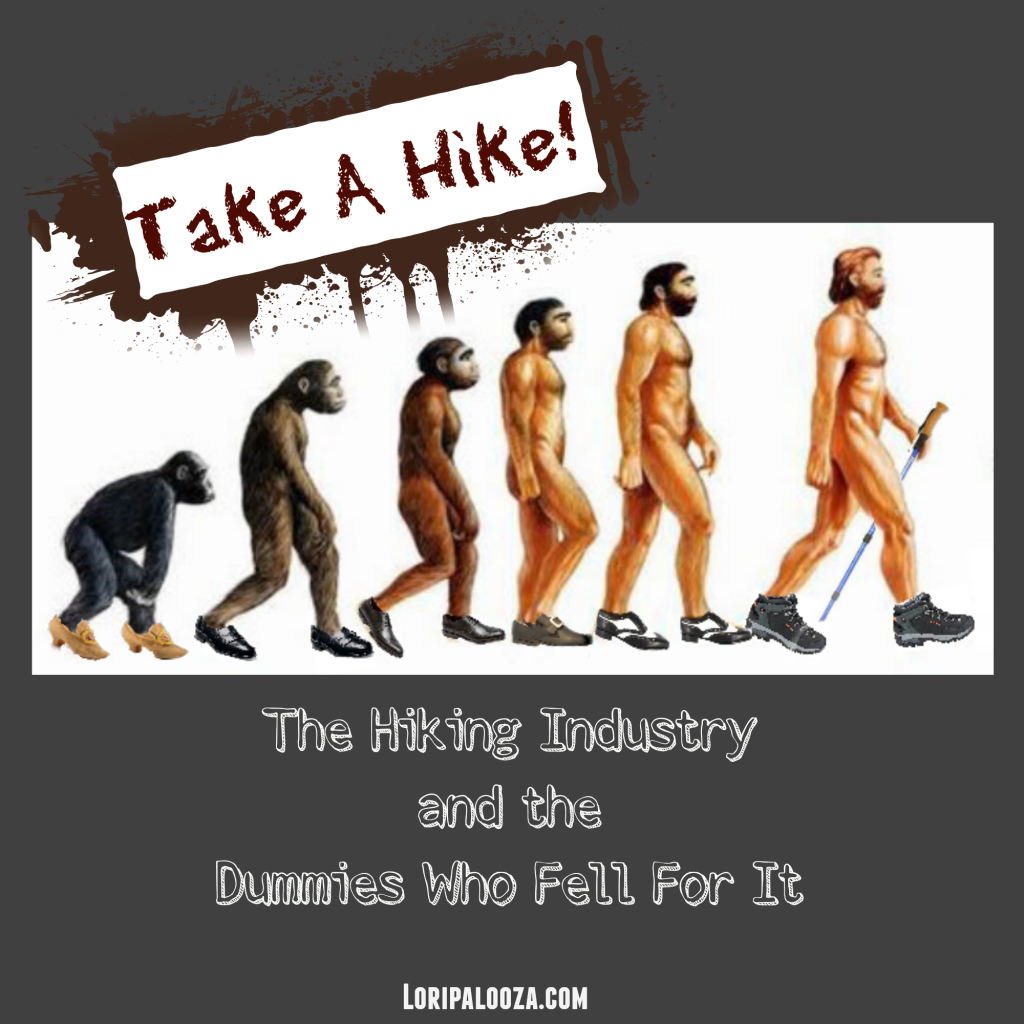 There are several things that really chap my ass, but being such a soft-spoken, girl-next-door type, I usually hold my tongue (see Stupid Suburban Problems and Moms Against Sexy Faces). However, most likely due to my menstrual cycle I have absolutely had it with hiking.

For centuries Homo sapiens have participated in this activity without need for fancy weatherproof boots, or collapsible, aluminum trekking poles. You know what they called it? They called it fucking walking! And they didn’t even brag about it.

So how did this multi-million dollar industry get started?

It began as a typical Tuesday in the early 1900’s when a third floor building that housed the headquarters for Millican’s Mustache Wax, Inc. encountered an elevator problem. Maintenance was called and it was estimated that the elevator could be out of operation for up to an hour.

Twelve men wearing suits and wingtip shoes took the stairs and ascended to the third floor on foot for the first time. As they rubbed their weary feet and scratched their heads being careful not to muss their heavily waxed coifs, one of them had a brilliant idea.

You know that thing we just did that poor people do all the time? Let’s make it into a sport. We could sell special shoes and make a fortune!

Mr. Merrell, the obese, mouth-breathing CFO having just walked in the door because he actually waited on the elevator to be fixed, chimed in. “Well, I could never do that. Not without a cane, or a backpack full of snacks.”

And that is how hiking came to be. As fortune would have it, Theodore Roosevelt would soon be gallivanting all over the country declaring National Parks everywhere he turned. This only served to reinforce the concept of walking with canes, special shoes and of course, snacks.

Call it a sport if you want to, but find me a pain-clinic patient with an appointment on the other side of town and a car that won’t start and I’ll show you the most extreme hiking you’ve ever seen. No shoes required.

All this typing has made me hungry. I think I’ll hike downstairs and make myself a snack.